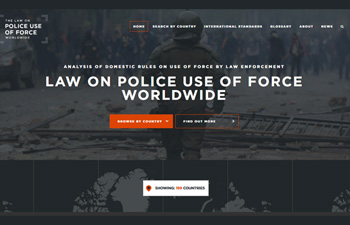 The Centre for Human Rights website covering domestic laws on the use of force by law enforcement officials worldwide (https://www.policinglaw.info) now covers the laws of 200 countries worldwide.

The website was started last year, under the supervision of Prof Stuart Maslen. Prof Maslen, who specialises in international law and in particular on the use of force, worked on his own and with students of the Centre, as well as with a clinical group at Oxford University and experts and students at universities in India and Switzerland, to gather the laws from these countries and to do an evaluation of how they measure up to international norms.

According to Prof Maslen "This repository of laws and regulations documents how each state controls the use of force by its police and other law enforcement agencies. We hope that it will support changes in legislation governing policing operations to conform to international law and standards".

The need for the website was identified by Prof Christof Heyns, based on his experience as a member of the UN Human Rights Committee and before that as UN Special Rapporteur on executions. According to Heyns: ‘It is often very difficult to gain access to the laws setting out when the police may use force in a particular country. As a UN representative I have spent weeks in countries asking everyone involved - from the Chief Justice to the Head of Police - for these laws, but to no avail. Ordinary members of the population have even less access to these all-important laws.  This means they have little effect in practice, and are not subject to criticisms and pressures to be brought into conformity with international standards. The new website is an enormously useful tool to allow such scrutiny to take place. We can now sit in the UN Human Rights Committee when a state reports to us, as cite to them the provisions of their laws on when the police may shoot, and engage with them on how to bring their laws in line with the international standards.’