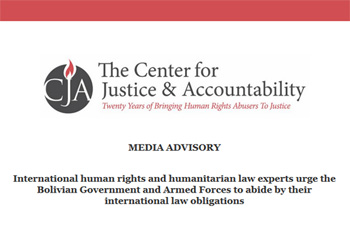 San Francisco, CA, and Cambridge, MA (November 26, 2019) -- Today, experts in international law urged the Bolivian Government to abide by its international legal obligations to protect the freedom of assembly and prohibit the excessive use of force against civilian protesters. In a statement signed by a former president and a former executive secretary of the Inter-American Commission, two former and the current UN Special Rapporteurs on Extrajudicial, Summary or Arbitrary Executions, two former UN Special Rapporteurs on Torture and Other Cruel, Inhuman and Degrading Conditions, as well as leading scholars in international law, the experts made clear what the Bolivian Government’s obligations are under international law.

Since October 20, 2019, there have been reports of deaths and injuries resulting from Bolivia’s social conflict. “In recent weeks, however, there has been a marked increase in the number of reported deaths attributed to security forces policing protests,” said Thomas Becker, Instructor at Harvard Law School’s International Human Rights Clinic. “The escalation in the use of lethal force by the Bolivian military and security forces is extremely concerning.”

In their statement, the experts highlighted that Bolivia’s international legal obligations require it to ensure that security forces responding to protests only use lethal force to protect life and only as a last resort. Indiscriminately firing into a crowd of protesters is never allowed.

The experts also raised concerns about the Bolivian Government’s apparent attempt to institute impunity measures through Supreme Decree 4078, which was issued on November 15, 2019. The decree purports to immunize “personnel of the Armed Forces participating in the operations to reestablish internal order and stability” for all actions undertaken in response to the current protests in the country. Under international law, domestic measures that attempt to create such impunity for gross human rights violations, including extrajudicial killings, are invalid.

“The Inter-American Court has held time and again that actions seeking to create impunity for gross human rights violations are incompatible with the American Convention. Governments and their security forces should know that they are not above the law despite domestic measures attempting to immunize them, and the Supreme Decree should be rescinded,” said Claret Vargas, Senior Staff Attorney at the Center for Justice and Accountability.

About the Center for Justice and Accountability

The Center for Justice and Accountability (CJA) is a San Francisco-based human rights legal organization dedicated to deterring torture, war crimes, crimes against humanity, and other serious human rights abuses around the world through innovative litigation, policy and transitional justice strategies. CJA partners with victims and survivors in pursuit of truth, justice, and redress, and has successfully brought cases against a former Minister of Defense of Somalia’s Siad Barre regime, the military officer responsible for the assassination of Chilean activist and singer Victor Jara, and Syria’s Assad regime for its targeted killing of war correspondent Marie Colvin. Visit www.cja.org or follow CJA on Twitter at @CJA_News. For further questions, please contact:

Claret Vargas
This email address is being protected from spambots. You need JavaScript enabled to view it.

About the International Human Rights Clinic at Harvard Law School

The International Human Rights Clinic at Harvard Law School works to protect the human rights of clients and communities around the world. Through supervised practice, students learn the responsibilities and skills of human rights lawyering. Learn more at http://hrp.law.harvard.edu/. Follow the Clinic on social media: Human Rights Program at Harvard Law School on Facebook, @HarvardLawHRP on Twitter, and humanrightsharvardlaw on Instagram. For further questions, please contact:

Thomas Becker
This email address is being protected from spambots. You need JavaScript enabled to view it.

Claret Vargas
Center for Justice & Accountability
This email address is being protected from spambots. You need JavaScript enabled to view it.