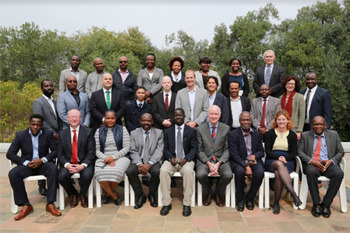 Constitutionalism and the economy in Africa 18-20 September 2019

The Seventh Stellenbosch Annual Seminar on Constitutionalism in Africa (SASCA) 2019, jointly organised by the Institute for International and Comparative Law in Africa (ICLA) of the Faculty of Law, University of Pretoria and the Stellenbosch Institute for Advanced Study (STIAS) in partnership with the South African Research Chair (SARChI) on Multilevel Government, Law and Policy at Dullah Omar Institute, University of the Western Cape,  and the Konrad Adenauer Stiftung Rule of Law Programme for Sub-Saharan Africa, based in Kenya took place in Stellenbosch from 18-20 September 2019. The theme for the seminar was; Constitutionalism and the Economy in Africa.

The 2019 seminar is premised on recent concerns for the state of the economy in Africa and the realisation that constitutions are very useful devices in shaping the economy. Indeed, Africa is the continent with the highest poverty level in the world where majority of the people lack access to basic amenities. The level of food insecurity is also alarming. A committed fight against poverty and related issues is dependent on a vibrant economy. A strong economy is critical for the well-being of a country and the exercise of its sovereignty. It is apposite to state that this issue goes beyond mere absence of material resources but the distribution and sharing of the available resources. Overall, the state has a crucial role to play in the economy be it through ownership, control, regulation and the distribution of resources for the benefit of all and not a selected few.
The seminar therefore set out to engage critically and reflect on how the economy in Africa can be strengthened using sound constitutional principles and practices. It interrogated issues regarding the nature of the economy, the nature of the state, the relationship between them and the global economic order in which they have to operate.

The 3-day seminar was organised around 10 sessions with presentations based on five sub-themes viz,

Each of the sessions was followed by robust debate and discussions.
Like in previous years, the diversity of participants was maintained. However, the highlight of the seminar were the keynote address by Mr. Trevor Manuel, a former Minister of Finance and Chairperson of Old Mutual Limited. His keynote address was followed by the launch of Decentralization and Constitutionalism in Africa (edited by Charles Fombad and Nico Steytler). This is the third book in the Stellenbosch Handbooks in African Constitution Law series.

The seminar was attended by both senior and junior academics from all around Africa (including Democratic Republic of Congo, Egypt, Ethiopia, Ghana, Kenya, Namibia, Nigeria, South Africa, and Zimbabwe).  Members of the civil society were also represented at the seminar. In keeping with the goal of developing capacity and mentoring future scholars, a few postgraduate students and postdoctoral researchers working in the area of the economy and constitutionalism in Africa were invited.

The papers presented during the seminar will be reviewed for possible publication in the sixth volume of the Oxford University Press series, Stellenbosch Handbooks in African Constitutional Law.