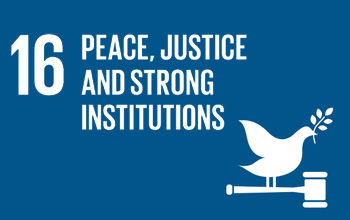 The researchers who form the Freedom from Violence initiative at ICLA will be involved over the coming months in drafting the text of South Africa’s National Report on the Sustainable Development Goals (SDGR) with respect to SDG-16, the goal aimed at promoting peaceful and inclusive societies, providing access to justice for all, and building effective, accountable and inclusive institutions at all levels.

ICLA will be partnering with the Centre for the Study of Governance Innovation (GovInn) and benefiting from the expertise of a range of other faculties across the UP campus as part of its multidisciplinary effort to bring together research focussed on violence reduction. Together, the partners will be one of four such research projects assigned to the University and linked together as part of the South African SDG Hub.

Based upon data supplied by Statistics South Africa (StatsSA), the partners will draw up the draft of the more than 100-page report devoted to measuring and assessing South Africa’s achievements across the diverse range of policy areas encompassed by SDG-16.  Among the Goal’s 12 targets are the following:

Each target has been linked with at least one globally agreed statistical indicator, benchmarked at the 2015 inception of the Sustainable Development Goals. The means of gathering data to contribute toward these indicators is within the remit of StatsSA, who have collected or verified the data that will be used in the report.  Of course, in addition to the SDGs, South Africa’s pursuit of the objectives of SDG-16 also further development framed by the National Development Plan and by the African Union’s Agenda 2063. These interlinkages will be elaborated in the report.

Researchers at ICLA and GovInn look forward to the exciting research avenues that this project will open over the coming months, and to the potential for fruitful engagements—both on and beyond the UP campus—it might bring thereafter.