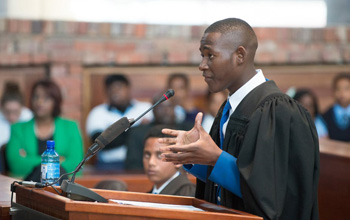 But some think that the human rights project has had its innings. They believe the notion of human rights for all is too idealistic. And populist leaders push the idea that the most powerful should prevail.

They’re wrong. Many people have benefited since the declaration was adopted.

But there’s little hope that people will understand the importance of a common normative framework like the Universal Declaration of Human Rights if it’s taught to them in the abstract. They need to see how it works in practice, through experience.

One especially powerful way to do this is through moot courts, or moots. At these events, school or university students play the role of lawyers in a hypothetical court case involving real-life legal and human right questions. The students appear in a simulated court in front of real judges and engage in a very real debate about the questions. The student “lawyers” must make the best case for whatever side they represent.

Moots are used around the world to help participants understand many aspects of varying fields of law. They’ve also proved to be a powerful tool in the field of human rights in a number of countries, including the Americas, Europe and Africa. There is now also an annual world human rights moot competition, held at the United Nations headquarters in Geneva.

One of most of the attractive features of moots as a tool for human rights education is that participants must argue both sides of the case. This helps them appreciate the multiplicity of perspectives and differences of opinion.

School moots are becoming an increasingly popular way to teach young people about the value of human rights. South Africa is one of the leaders in this field: the country’s National Schools Moot Court Competition has grown dramatically since it started eight years ago. In 2018 it is expected to reach up to 2 million learners across the country, out of around 11 million.

The competition is co-organised by the country’s Human Rights Commission, which investigates and seeks redress for human rights violations, and teaches people about the value of human rights; the government; and universities. The learners are required to prepare written and oral arguments for both sides of a typical dispute involving human rights questions, using the South African Constitution as their point of reference.

The hypothetical cases they have to argue resonate with everyone. For example, should learners be allowed to come to school with nose rings or dreadlocks when the school rules forbid them? What’s to be done when a learner challenges the school’s language policy, or says things that offend some people?

Other countries in Africa, such as Ghana, have started replicating the model of cooperation between National Human Rights Commissions, universities and governments. And preparations are under way in Mozambique for their very own national schools moot project modelled on the South African experience.

There are good reasons to think these moots can take root in all parts of the world. There are schools in even the most remote parts of the world. And almost all the countries of the world now have constitutions with a bills of rights. There are national human rights commissions in most countries. If even half of those commissions were to team up with their countries’ departments of education and the judiciary to stage moots based on the countries’ constitutions in all its schools the impact would be enormous.

The school moots are extremely valuable learning experiences. One 16-year-old participant in South Africa, Shandre Smith, told us the moot had taught her “about human rights and the change it can bring in our lives”. Smith said:

I think I am becoming a more responsible and tolerant global citizen.

In a world rife with uncertainty, experiences like this can help to renew people’s faith in and commitment to the idea of human rights. That’s a significant step towards ensuring a common understanding of the basic terms of our shared existence.