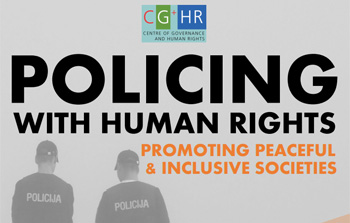 The police play a vital role in protecting and promoting a wide range of human rights in contemporary societies. The expansiveness of their role combined with their very direct engagement with the public gives way to unique tensions; it signifies that police in one instance are called to act as state agents whose very actions either tangibly respect or fail to respect an individuals’ rights while in another, they can act as the state’s first line of defence in protecting rights from violations.

In certain circumstances, protecting the rights of some can interfere with the rights of others, only heightening the controversy surrounding police and the act of policing. In some cases, the police exemplify—in an acute and visible way—the tensions festering beneath the surface of wider social interactions; in other cases, they may create their own, specific challenges. The use of force by the police brings these challenges into stark relief. The most widely recognized use of force is their use of lethal force, but force can also be lower-level invasions of personal privacy such as “stop and search”. Are these practices necessary? Do they facilitate or impede peace and inclusion?

In light of these challenges among others, the global community committed in 2015, through SDG 16 , to significantly reduce the levels of violence in society. Thus, the CGHR has arranged this panel of experts to discuss the extent to which the police are both an important ally and target of sustainable development given existent problems and tensions. The SDGs emphasise the importance of providing access to justice and building accountable and inclusive institutions at all levels, but what are the existing challenges—especially those surrounding use of force—and how can they be addressed so goals such as those laid out in the SDGs can become a reality?