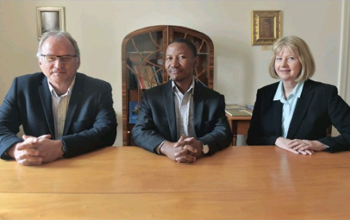 Three law professors from the Tuks faculty of law, Christof Heyns, Dire Tladi and Ann Skelton, serve as international experts on key UN bodies in Geneva, responsible for the development and application of international law.

THE University of Pretoria is currently in the unique position where three law professors from the faculty of law serve as international experts on key UN bodies in Geneva, responsible for the development and application of international law.

According to the dean of the faculty of law, Professor Andre Boraine, such a concentration of international experts in one university is exceptional by any standard.

“Some – not even all – countries count themselves lucky if they have one person in these key UN positions: here we have three experts not only from one country but also from one university,” he said.

Professor Dire Tladi is a member of the UN International Law Commission (ILC), responsible for the codification of international law.

The ILC holds the mandate in the UN for the codification and progressive development of international law. Many important treaties of international law, including the Vienna Convention on Diplomatic Relations and the Rome Statute of the International Criminal Court, arose from proposals of the work of ILC.

The main issues under debate in the August session of the ILC concerned the rules relating to immunities of State Officials from Foreign Criminal Jurisdiction; Crimes against Humanity and Peremptory Norms of General International Law. The latter topic was of particular importance to Tladi because it was a topic that he proposed and for which he serves as the special rapporteur. The topic concerns the methodology to identify those rules from which no derogation is permitted. These are the most fundamental rules of international law, such as the prohibition on the use of force, the prohibition of genocide and others of similar importance.

Tladi is also special adviser to the minister of international relations and co-operation, and recently served as lead counsel for the South African government in the Omar al-Bashir case before the International Criminal Court.

Professor Ann Skelton is the director of the University of Pretoria’s Centre for Child Law where she also holds the Unesco chair of education law in Africa. Since March she has been serving as a member of the UN Committee on the Rights of the Child. The committee provides international oversight into states’ progress with regard to children’s rights. Every country in the world has ratified the UN Convention on the Rights of the Child except the US.

Professor Christof Heyns is a member of the UN Human Rights Committee. The committee has a broad mandate and monitors compliance by states with civil and political rights.

“People who have sought legal relief in their home countries but claim their rights are still being violated, can approach us to consider their cases,” says Heyns.

During the recent session, the committee pronounced itself on cases as diverse as compulsory voting in Australia, the retention of DNA samples taken from youthful offenders by the Dutch Government, and the absolute powers of the King of Swaziland. “I was fortunate to join the committee earlier this year while it was working on a general comment on the right to life, which provides a contemporary interpretation of the law applicable to issues such as the death penalty and the use of force by law enforcement officials. It will also serve as a basis for assessing the use of armed drones and targeted killing. I have spent the past six years as UN Special Rapporteur on executions dealing with these issues, which means that engaging with the general comment was right up my alley.”

According to Heyns, it is a rare privilege to be based in a faculty where there is such a critical mass. “We continue our conversations in Geneva, as well as in Pretoria. When you are working on a report for Geneva back home you can walk to the office next door to talk about it with someone who knows exactly what you mean.”

In addition to the above, the three A-rated international law professors in the country – including John Dugard, who has served as an ad hoc judge of the International Court of Justice – also teach at UP or hold extra-ordinary positions. One of them, Professor Erika de Wet, holds the SARCHi Chair in International Constitutional Law.

The concentration of expertise at UP has a direct impact on the students. “The UP students are also top performers in the international moot competitions,” said Boraine. He mentioned for example the 16th position that UP earlier this year achieved on the world rankings in the Jessup Competition in Washington DC.

The “international law revolution” at UP can largely be traced to the work of the Centre for Human Rights from the 1980s onwards. The centre was responsible for establishing the first African Moot Court Competition, and now the World Moot Court Competition, which takes place in Geneva every year. Moreover, the centre presents and award-winning human rights masters programme.

According to Boraine, the alumni of this programme from the past two decades are now the chief justices, cabinet ministers, deans, and human rights defenders on the continent. They form a large network, and support each other’s work. Graduate by graduate, there has been a transformation of international law on our continent.

The current director of the Centre for Human Rights, Professor Frans Viljoen, is widely recognised as the leading world expert on human rights in Africa. The founding director, Professor Johann van der Westhuizen, has recently returned to the faculty (to head the department of jurisprudence – to be said only when officially confirmed) after having served as a Justice of the Constitutional Court.

According to Boraine, most of the international law experts who teach at UP also hold teaching positions at prestigious institutions such as Oxford and The Hague Academy.

However, at the moment UP seems to be their ideal home base.