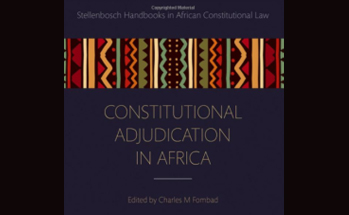 This post is in conversation with Professor Charles M Fombad editor of the recently published Constitutional Adjudication in Africa (Oxford University Press, 2017).

Tell us a little bit about the book

What inspired you to take up this project?

This book is the second volume in a new series, the Stellenbosch Handbooks in African Constitutional Law, which is specifically designed to fill a gap in scholarship on African comparative constitutional law. The series was motivated by recognition of the fact that, although comparative constitutional law has now emerged strongly in the last two decades as a major field of legal scholarship, most of the extensive research and publications that have been carried out have focused mainly on the well-established democracies. The only African country that has occasionally attracted some research interest from a comparative law perspective is South Africa. The few books that do present some perspectives on African comparative constitutional law focus narrowly and exclusively on developments on either Anglophone, Francophone, or Arabophone Africa but with nothing cutting across these divides. The overriding objective of these series of books is therefore to bring together high quality innovative and original material from diverse perspectives written by scholars and legal practitioners drawn from the different constitutional traditions operating on the continent.

Whose work was influential on you throughout the course of the project?

As a volume that tried to bring together the different models of constitutional adjudication on the continent, all the authors had to draw from the scholarship of renowned authors who have written on the different models of constitutional review that have influenced developments in their countries. Nevertheless, in most cases, but for a few exceptions, the authors were researching and writing on a topic on which little had previously been written.

What challenges did you face in writing the book?

Identifying and bringing together scholars from Anglophone, Arabophone, Francophone, Hispanophone, and Lusophone Africa who understand and share the vision of the whole project and are able to meet the high standards of Oxford University Press has been a major challenge. It is also not often easy to reconcile the different styles of writing.

What do you hope to see as the book’s contribution to academic discourse and to constitutional or public law more broadly?

My hope is that this book and the Stellenbosch Handbooks in African Constitutional Law series as a whole, will not only stimulate interest in comparative constitutional law research and studies on the different constitutional traditions operating in Africa but also point directions for future research. It should also serve as a rich source of authoritative information for promoting an intra-African legal dialogue and the cross-fertilization of ideas across the different constitutional traditions. Furthermore, the books in the series are intended to act as a repository for the accumulation of knowledge, experience, and expertise on the continent. My hope is to bring comparative African constitutional law scholarship to the global stage.

Charles M Fombad is a Professor of Law at the University of Pretoria.