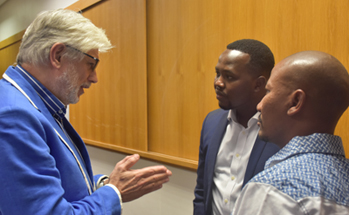 On 11 September 2017, the Institute of International and Comparative Law in Africa at the University of Pretoria hosted a debate between Professor Dire Tladi and Dr Thompson Chengeta on whether the Government of South Africa’s decision to grant Grace Mugabe immunity is within the confines of the law. The debate was chaired by the Director of Centre for Human Rights, Professor Frans Viljoen.

Chengeta put forward two main arguments: First, he argued that Grace Mugabe is not entitled to immunity by virtue of the claim that her itinerary included attending the 37th SADC Summit because Section 6 (2) of the SADC Protocol on Immunities and Privileges provides that immunities should not be granted for personal benefit especially in circumstances where it defeats the course of justice. Under the same provision, Zimbabwe was under an obligation to waive immunity. Although South Africa is not party to this SADC Protocol, Chengeta argued that the Government of South Africa should have seriously considered the SADC Protocol since it relates to SADC Summits and Meetings. Over and above, he argued that in fact, at the time of the alleged assault incident, Grace Mugabe was in South Africa attending a private matter.

Second, Chengeta argued that while there may be derivative immunity under customary international law to cover spouses of Heads of States when they are accompanying their husbands, there is no sufficient state practice and opinion juris that such immunity extends to spouses who are travelling independently and for private business as was the case with Grace Mugabe. As such, South Africa extended immunity to Grace Mugabe as a matter of comity, not law, in violation of South Africa’s national and international obligations including the obligation to protect victims from actions of private parties.

On the other hand, Tladi argued that the SADC Protocol on Immunities and Privileges is of no effect to the Grace Mugabe matter because South Africa is not party to it and as long as immunity has not been waived by the sending state, South Africa should respect it. Further, he argued that there is sufficient state practice in terms of legislation and judicial decisions pointing to the fact that spouses of Heads of States enjoy immunities when they are accompanying their husbands. Thus, from the time Grace Mugabe joined her husband in Pretoria for the SADC Summit, she became inviolable.

After the debate, questions were raised as to whether the situation with Grace Mugabe would have been different if she was arrested on the night of the incident or before joining her husband. Further, if immunity is granted to spouses of Heads of States when they are accompanying their husbands, the question is whether there should be an active arrest warrant against Grace Mugabe in case she returns to the Republic of South Africa not in the company of Robert Mugabe and not on official business.