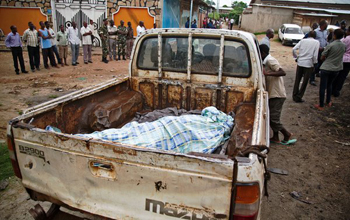 GENEVA — “I could be your child; I beg you, save me,” the 16-year-old pleaded to police officers in Burundi. Seconds later, an officer put two bullets in his head.

The killing of the teenager, Jean Nepo, during an antigovernment protest on the streets of Bujumbura, the capital, was one of hundreds of summary killings cited by United Nations investigators in a report issued on Tuesday. The report documented serious abuses during the last 18 months that could amount to crimes against humanity.

“The responsibility for the vast majority of these violations should be laid at the door of the government,” the investigators wrote, urging international action to contain a crisis they said threatened the peace and security of the surrounding region in Central Africa.

The report documented 564 summary killings in Burundi from April 2015 to the end of August, but the report’s three authors wrote that “this is clearly a conservative estimate.” Their inquiry began in December and included two visits to Burundi.

The investigators also found that thousands of people had been tortured; countless women had been subjected to sexual violence, including mutilations; hundreds of people had disappeared; and more than 286,000 had fled to neighboring countries.

While opposition groups were responsible for some of the violence, the report said, a large majority of victims have been identified as people who were opposed or perceived to be opposed to the government, or who belonged to opposition parties.

The violence erupted in April 2015 after President Pierre Nkurunziza announced his intention to run for a third term in office, which set off antigovernment protests and a failed coup the next month. He won a third term that July in a much-criticized election.

A former senior officer in the country’s National Defense Force confirmed the existence of several lists of people who were to be killed, the investigators said.

Human rights activists and journalists have been the primary targets of the government’s crackdown, the United Nations team reported, citing the killing of a local television reporter at his house, purportedly by the police. His wife and two children were said to have been forced to kneel by his body for two hours until his attackers decided to kill them, as well.

The report cited the testimony of a member of the Imbonerakure youth militia who said he had participated in about 20 killings; he said the bodies were taken by boat across the Ruzizi River into the Democratic Republic of Congo and buried there. The investigators also reported that satellite imagery suggested the existence of mass graves in several places in Burundi, but that the government had not taken up an offer to record and investigate the sites.

Other witnesses detailed types of torture carried out by security forces, including burning people with a blowtorch, attaching weights to testicles and forcing victims to sit in acid or on broken glass.

The investigators said they had compiled a list of people frequently identified by victims and witnesses as responsible for these abuses.

Writing on Twitter, a presidential adviser, Willy Nyamitwe, rejected the United Nations report, describing it as “politically motivated and based on anonymous, unverified testimony.” He said he had sent a 40-page response to the United Nations human rights office.

Public violence in Burundi has declined this year, possibly as a result of growing international awareness of the crisis, but to a large extent because repression “is more systematic, and is increasing,” the investigators concluded.

Human rights activists have said that the crisis did not stem from tension between Burundi’s Hutu and Tutsi ethnic groups, but the United Nations team expressed concern that inflammatory language by state officials threatened to provoke ethnic tensions even beyond Burundi’s borders.

Without robust action by Burundi’s government and other countries, the downward spiral is likely to continue, they said, “endangering not only the rights of individuals concerned, but also the overall security of the region.”