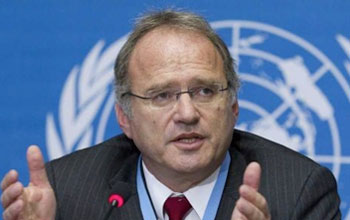 The Office of the United Nations (UN) High Commissioner for Human Rights (OHCHR) in Geneva announced on 24 May 2017 the release of the Minnesota Protocol on the Investigation of Potentially Unlawful Death (2016).

The Minnesota Protocol sets out the international standards for the investigation of suspicious deaths, where states may in one way or another be considered responsible. It also applies to enforced disappearances.

The Protocol is aimed at informing and guiding the actions of crime scene investigators, medical practitioners, lawyers, commissions of inquiry and others involved in investigating suspicious deaths.

The Protocol was drafted by a group of 73 international legal and forensic experts over a period of two years under the auspices of the United Nations Special Rapporteur on extrajudicial, summary or arbitrary executions, Prof Christof Heyns, and the UN Office of the High Commissioner for Human Rights.

The University of Pretoria played an important role in drafting the new Protocol. Prof Heyns teaches human rights law in the University's Faculty of Law. Dr Stu Maslen, who coordinated the research is an honorary professor in the Faculty, and Dr Thomas Probert is a Senior Researcher. Prof Pieter Carstens, who teaches medical law in the Faculty, served on the advisory board of the revision project, as did Prof Gert Saayman, Head of the Department of Forensic Medicine in the University's Faculty of Health Sciences.

Stressing the significance of the new Protocol, the UN High Commissioner Zeid Ra'ad Al Hussein said: 'Proper investigations into suspicious deaths are an integral part of the protection of the right to life. Investigations are the key to accountability. But all too often lives are taken with impunity because proper investigations are not conducted, whether with respect to an individual body found dead in the gutter, or an entire section of the community subjected to summary executions. The revised Protocol will be an indispensable tool in ensuring effective and fair trials and other forms of accountability.'

A scoping exercise conducted before the new version of the Protocol was drafted showed that the original Minnesota Protocol of 1991 was regarded as the gold standard in the area of forensic investigations by medical practitioners, and in this context had been relied upon by several international and national tribunals. At the same time, it had become outdated in the 25 years since it was first adopted, in that new medical developments, such as DNA evidence, were not reflected. The legal section was also underdeveloped in the original version. The revised text seeks to provide a stronger basis for the protection of the right to life by setting out both the state of international law and best forensic practice in the investigation of suspicious deaths.

Prof Heyns commented as follows: 'We hope and believe that the new Protocol will have a significant impact on accountability for violations of the right to life, and as such on the better protection of life – often viewed as "the supreme right".'

The Protocol will soon be available in all six UN languages, and has been translated into Thai.