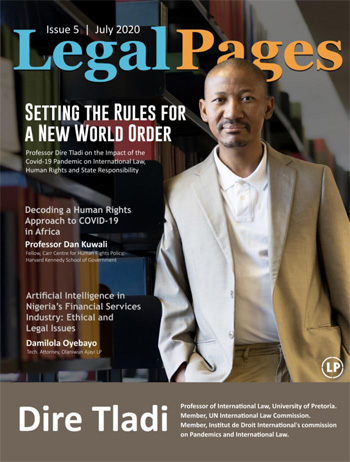 Professor Dire Tladi in the Department of Public Law and a Fellow at the Institute for International and Comparative Law in Africa in the Faculty of Law at the University of Pretoria futures in Issue 5 of the Legal Pages, July 2020, (page 7 to 12) on ‘The impact of the Covid-19  Pandemic on International Law, Human Rights and State Responsibility.’

The Legal Pages interview with Tladi is based on his appointment to serve on the Institut de Droit’s Commission on Pandemics and International Law. In this article, he shares his professional experience, the multifarious roles of international law in these dire times, and inter alia, his passion for fiction writing.  He also has a strong message for law and policymakers across the Africa continent:  'The people of this continent need strong leaders to take them out of the abyss of poverty. Lead for them!'

In 2006 he joined the Department of International Relations and Cooperation (then Department of Foreign Affairs), as Principal State Law Advisor for International Law.  From 2009 to 2013 he served as legal advisor to the South African Permanent Mission to the United Nations.