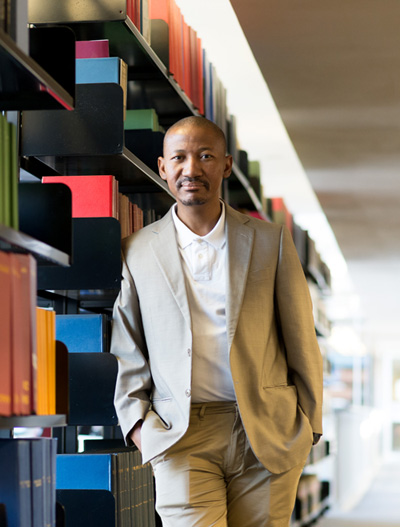 Dire Tladi is a professor of international law in the Department of Public of Law and a Fellow at the Institute of Comparative and International Law in Africa of the University of Pretoria. He is also NRF SARChI Chair for International Constitutional Law.

He has appeared as counsel before the International Criminal Court’s Pre-Trial and Appeals Chambers.

Dire Tladi has held visiting professorships and fellows at Kobe University, Humboldt University in Berlin and University of California Irvine. He is two-time recipient of the Fulbright scholarship.

In addition to teaching at the University of Pretoria, Tladi also presents lectures at the UN regional courses on international law for Africa, Latin America and the Caribbean and Asia.

The Pursuit of a Brave New World in International Law: Essays in Honour of John Dugard (Brill 2017) (with Maluwa and du Plessis)

‘The Authority and Membership of the Commission: Concluding Remarks’ in United Nations (ed.) Seventy Years of the International Law Commission: Drawing a Balance for the Future (Brill, 2020)

‘The Duty not Intervene in Matters within Domestic Jurisdiction’ in Jorge Vinuales The UN Friendly Relations Declaration at 50: An Assessment of the Fundamental Principles of International Law (Cambridge, 2020)

‘Article 46A Bis: Beyond the Rhetoric’ in Charles Jalloh, Kamari Clarke and Vincent Nmehielle (eds.) The African Court of Justice and Human and Peoples’ Rights: Development and Challenges (Cambridge, 2019)

‘The Intervention in Côte d’Ivoire’ in Tom Ruys and Olivier Cortern (eds) International Law and the Use of Force: A Case-Based Approach (OUP, 2018)

‘Pursuing a Brave New World for the Oceans: The Place of the Common Heritage of Mankind in a Proposed Law of the Treaty’ in Maluwa, du Plessis and Tladi The Pursuit of a Brave New World in International Law: Essays in Honour of John Dugard (Brill, 2017) 87 – 113

‘Presence of the Accused, Right or Duty? The Art of Interpretation in a Tense Political Climate’ in Jalloh and Bantekas (eds) The International Criminal Court and Africa (OUP, 2017)

‘Interpretation of Protection of Civilian Mandates in United Nations Security Council Resolutions’ in Kuwali and Viljoen (eds.) By All Means Necessary: Protecting Civilians and Preventing Mass Atrocities in Africa (PULP, 2017)

‘Conservation and Sustainable Use of Marine Biological Diversity in Areas Beyond National Jurisdiction: Towards an Implementing Agreement’ in Rayfuse (ed) Research Handbook in Marine Environmental Law (2015, Routledge)

‘The United Nations Charter and the South African Legal Order’ in de Wet and Hestermeyer (eds) The Implementation of International Law in Germany and South Africa (PULP, 2015) 88-111

‘The Use of Force against Syria in Response to Alleged Use of Chemical Weapons by Syria: A Return to Humanitarian Intervention? (2019) 79 Zeitschrift für ausländisches öffentliches Recht und Völkerrecht 205

‘Of Heroes and Villains, Angels and Demons: The ICC-AU Tension Revisited” (2017) German Yearbook of International Law 43

‘The International Law Commission’s Draft Articles on the Protection of Persons in the Event of Disasters: Codification, Progressive Development or Creation of Law from Thin Air?’ (2017) 16 Chinese Journal of International Law 425

‘The Proposed Implementing Agreement: Options for Coherence and Consistency in the Establishment of Marine Protected Areas’ (2015) 30 International Journal of Marine and Coastal Law 654

‘The Immunity Provisions in the AU Amendment Protocol: Separating the (Doctrinal) Wheat from the Normative (Chaff)’ (2015) 13 Journal of International Criminal Justice 3

Ahmed Linga
Interpretation of treaties and the unity of international law: The case of the Rome Statue of the International Criminal Court

Doris Uwicyeza
The realisation of complementarity in the Malabo Protocol

Madila Ngoai
The triangular relationship between the United Nations Security Council, the International Criminal Court and the African Union through the lens of cooperation: the implications for international criminal justice

Ron van Diermen
The attitude of Africa towards International Criminal Court prior and post Security Council Resolutions 1970 and 1973 (2011). Is Africa having a case in contemplating the mass withdrawal from the Rome Statue of 2002?

Kobina Daniel
Head of state immunity under the Malabo protocol