Less Lethal than Firearms, But Only if Used Appropriately 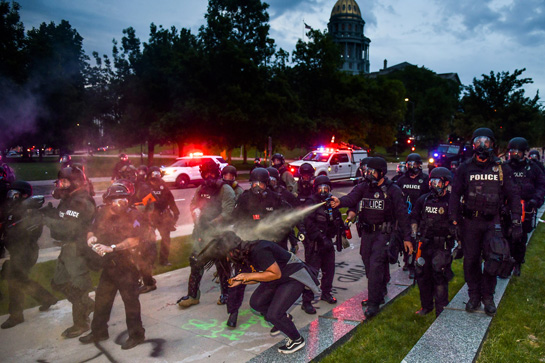 The excessive use of force by U.S. police forces in responding to the wave of demonstrations that have taken place throughout the country in the wake of the killings of Ahmaud Arbery, Breonna Taylor, George Floyd, and Rayshard Brooks has rightly been widely condemned. In particular, events in the United States in recent weeks have highlighted the reality that far too often police use of force has a distinct racial bias. In the words of the United Nations High Commissioner for Human Rights Michelle Bachelet, speaking during an urgent debate in the Human Rights Council on racism and excessive use of force in policing on June 17, “Too little has changed over too many years.”

Sometimes, as in the shooting of Rayshard Brooks by an Atlanta law enforcement officer, deaths involve police use of firearms. But as the killing of George Floyd has also demonstrated, firearms are not the only means by which law enforcement officials can brutally end life. Shocking footage of Floyd being choked to death by a Minneapolis police officer on May 25 demonstrates the risks of chokeholds and other techniques that can cause death due to positional asphyxia.

At the international level, the need for law enforcement officials to be equipped with less-lethal weapons and equipment — and trained in their appropriate use — has been recognized in Principles 2 and 18 of the Basic Principles on the Use of Force and Firearms by Law Enforcement Officials adopted in 1990 by the U.N. Congress on the Prevention of Crime and the Treatment of Offenders, though no further details were given at the time. Less-lethal weapons were seen by U.N. member states as contributing to efforts that would “increasingly restraining the application of means capable of causing death or injury to persons” by law enforcement agents (Principle 2).

Certainly, as a result of the increased availability of less-lethal weapons over recent decades, tens of thousands of people are likely to have survived interactions with police who might otherwise have been shot and either killed or seriously injured.

But experience since 1990 — and tragically illustrated again in recent days and weeks — has shown us that “less-lethal” does not mean “non-lethal.” Over time, as new weapons using different technologies became available, many nations failed to equip their police forces with appropriate less-lethal weapons or neglected to ensure officers were sufficiently trained in the appropriate use of what weapons were provided.

Indeed, the mere fact that the police are, in many instances, equipped with less-lethal weapons and schooled in “non-lethal” techniques is no guarantee that force used is not excessive — these weapons and techniques still entail substantial risk for serious injury or even death. International rules on the use of firearms are clear: the use of deadly force with firearms during recent events would undoubtedly have been unlawful in the overwhelming majority of cases (see e.g. paras. 226-228 here; para. 60 here). But the regulation of the different types of less-lethal weapons used by the police remains less clear-cut.

The effects of gaps in the availability of less-lethal weapons, police department regulations and training regarding these weapons, and international rules on them are most clearly seen in flawed attempts to effect safe arrests — safe for both the law enforcement official(s) and arrestee involved — and poor public order management. In 2014, amid growing evidence of operational failures and increasingly frequent mass demonstrations and protests, the U.N. Human Rights Council encouraged states to make less-lethal weapons “available to their officials exercising law enforcement duties,” while also “pursuing international efforts to regulate and establish protocols” for their use (para. 14 here).

To address the latter, the U.N. recently published a set of detailed international guidelines, to which we contributed. In an international expert process conducted under the auspices of the U.N. Office of the High Commissioner for Human Rights, we worked with those versed in policing with less-lethal weapons, those steeped in the capabilities and dangers from such law enforcement weaponry, and human rights lawyers to devise detailed guidance on less-lethal weapons. The result, the United Nations Human Rights Guidance on Less-Lethal Weapons in Law Enforcement (Guidance), represents the first set of international standards on law enforcement use of less-lethal weapons and related equipment. As such, it serves to supplement the U.N. Basic Principles on the Use of Force and Firearms. In her remarks to the Human Rights Council on 17 June, Bachelet encouraged governments around the world to apply the guidelines to their law enforcement agencies and operations.

Articulated in the Guidance are basic principles for the design, procurement, deployment, and appropriate use of such weapons, along with the risks inherent in some of the most common weapons: batons, pepper spray, tear gas, water cannon, and electroshock weapons (such as TASERs). As a basic principle, these weapons must only be employed when force is strictly necessary. Unnecessary force is unlawful force. The Guidance makes it clear that hand-held chemical irritants (e.g. PAVA or pepper sprays) should not be used in situations of purely passive resistance, where protesters are refusing to move upon the command of a police officer, and never when individuals are unable to move, for instance because they are handcuffed or chained to an immovable object (Guidance, para. 7.2.7).

Deaths at the hands of law enforcement officials, even if they use less-lethal weapons, probably cannot be totally eliminated. But deaths resulting from a baton strike to a particularly vulnerable part of the body such as the head, or as a result of being hit in the upper body by a tear gas canister, are entirely avoidable through clear operational guidance on the use of these weapons, scenario-based training, and, of course, meaningful accountability. Where they are not effectively targeted at the legs or lower torso, kinetic impact projectiles such as rubber bullets or baton rounds may result in skull fracture and brain injury; damage to the eyes, including permanent blindness; and even death (Guidance, paras. 7.5.3 and 7.5.8).

In accordance with the Guidance, TASER probes should not be fired at someone standing on a wall, much less a roof (as occurred in Los Angeles in 2014), given that the neuromuscular incapacitation means that the individual cannot prevent their fall (Guidance, para. 7.4.5). Tear gas, to provide another example, should not be fired in confined spaces where individuals are trapped without the possibility to exit, owing to the risk of respiratory distress that may progress to potentially fatal lung injury (Guidance, para. 7.3.7), an especially important limitation given recent misuses of tear gas in Hong Kong and the United States.

Overall, the Guidance is designed to be used by law enforcement agencies around the world when they develop law, policies, regulations, standard operating procedures, and in conducting associated training, to ensure law enforcement officials and those they interact with remain safe, whether on the streets or in custodial settings.

During recent years, international human rights law has placed an increasing emphasis on the requirement of “precaution,” aimed at the prevention or mitigation of the use of force, through proper operational planning and readiness (see Guidance para. 2.6; McCann and others v. United Kingdom, para. 194). This means agencies should plan to arrest in a safe manner at an early stage of a law enforcement operation. Equipping law enforcement officials with appropriate less-lethal weapons and equipment is an important element of such precautionary measures.

The world has recently witnessed some shocking instances of the use of force by the police, resulting in tragic losses of life. These cases have underlined the importance of asking fundamental questions about the proper role of law enforcement officials in securing public safety. Hopefully, these tragic events will serve as a catalyst for law enforcement agencies and other authorities to bring their practices and policies into line with the international standards.

Professor of Human Rights Law and Director of the Institute for International and Comparative Law in Africa at the University of Pretoria. Member of the UN Human Rights Committee.

Head of Research, Freedom from Violence initiative at the Institute for International and Comparative Law in Africa (University of Pretoria); Research Associate, Centre of Governance and Human Rights (University of Cambridge). Follow him on Twitter (@tjwprobert).