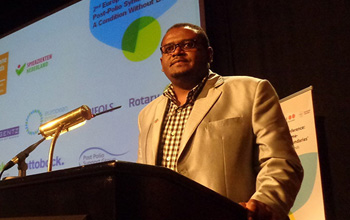 “I grew up noticing that most people around me never expected me to achieve anything more than maybe earning a living wage someday. It’s precisely these perceptions, which, contrary to holding me back, kept pushing me forward. They reminded me of the need to prove that, even amid countless barriers and the disability-unfriendly ambiance of one of the world’s poorest nations, an individual with disability can become a voice to be reckoned with.”

Prior to enrolling at SU, Dag obtained a degree in Law (LLB) from Addis Ababa University, and worked with a number of local non-governmental and civil society organisations focused on disability mainstreaming in Ethiopia and East Africa.

“In 2009, I was recruited as a research assistant in a research project known as the African Policy on Disability and Development (APODD) – jointly led by the Centre for Rehabilitation Studies (CRS) at Stellenbosch University and the Trinity College Dublin. As part of this, I was awarded a scholarship to do my Master’s degree in research at SU, majoring in Disability and Development.

“Immediately after graduating in 2011, I was invited to represent youth with disabilities on the Board of the Africa Disability Alliance (ADA). In the same year, I was invited to participate in a continental roundtable that later gave birth to a new African Continental Plan of Action on Disability (CPoA) and the second African Decade of Persons with Disabilities (ADPD), covering the years 2010-2019.”

Dag has represented Africa and his cause at many regional and international fora and was also selected for the Mandela Washington Fellowship (MWF), an initiative by former United States president Barack Obama.

“The objective of the MWF exchange programme is to empower the next generation of African leaders and it creates a networking platform for hundreds of vibrant, young African change agents. Not only did this programme equip us with transcending leadership tools but it also enabled me to see how much work still remains to be done to change mindsets of ableism, tendencies of exclusion and disability-based prejudice even among the elite, the educated and the informed.”

Dag’s dream is to do meaningful research that will have a lasting impact on addressing disability-based discrimination and violence in Africa. He has recently received a scholarship from the Institute for International and Comparative Law in Africa (ICLA) at the University of Pretoria to pursue a Doctorate of Law focused on violence against persons with disabilities in Africa.

“Going forward, I am keen on working as a university professor – if/when the opportunity arises – to teach and mentor the next generation of young scholars, including scholars with disabilities and other minorities within and beyond Africa, who are interested in human rights, disability rights and inclusive development. Change is already right here, and the youth, disadvantaged youth included, should be empowered and given the chance to lead by example.”