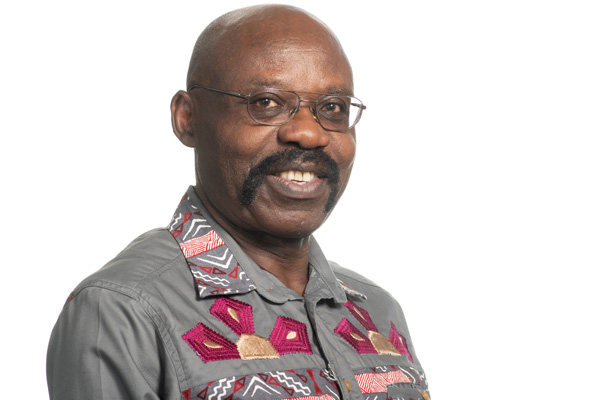 The Faculty of Law (UP Law) at the University of Pretoria (UP) announces with pride and congratulates Professor of Law Charles Fombad on his appointment as Director of the research institute, Institute for International and Comparative Law in Africa (ICLA) in UP Law, effective from 1 September 2021.

Professor Fombad holds the degrees Lic-en-Drt (University of Yaounde), LLM, PhD (University of London) and a diploma in Conflict Resolution (University of Uppsala).  He has been based in ICLA as head of the Comparative African Law Unit since 2012. He joined UP Law in 2010 as Head of UP Law's Department of Public Law.  He is a member of the Academy of Science of South Africa, a fellow of the Stellenbosch Institute for Advanced Study (STIAS), Associate Member of the International Academy of Comparative Law and Vice President of the International Association of Constitutional Law.

Drawing on the extensive networks that UP Law has established over many years in Africa and beyond, the objective of the ICLA is to become a port of call for those who wish to engage in legal research and legal reform in Africa involving comparative or international law at the advanced level.  Fombad follows in the footsteps of the late Professor Christof Heyns, who was the director of ICLA since its establishment in 2011 until his sudden passing on 28 March 2021.  ICLA is located in a double-story house next to the Law Building on the Hatfield Campus. It houses an extensive collection of antique furniture and art, and also serves as the Christo Coetzee museum.

Dean Professor Elsabe Schoeman congratulated Fombad, stating that 'he indeed has big shoes to fill.  His appointment means that we deem his vast experience and expertise more than suitable for this position and have full confidence in Professor Fombad to take ICLA forth to new Africa and international heights.  Congrats, Charles, and all of the best with this very important task to your ICLA team and you!'

UP Law posed the following questions to the new director:

What is your vision for ICLA and how do you plan to lead ICLA?

ICLA is ten years old now. From the start, it had a very ambitious vision. The plan was to make it the continental focal point for academic and applied research of relevance to Africa. It has largely done this, under the inspiring leadership of the former Director, the late Professor Christof Heyns. It has been attracting leading researchers from the region and the world to engage in cutting-edge research. Over and above this, through an elaborate network of partnerships developed during this period with several intergovernmental organisations and their agencies, especially the UN and the AU as well as donor countries, ICLA has generated and disseminated a lot of information designed to promote respect for the rule of law, constitutionalism, good governance and democracy - not only in Africa, but in the world.

In many respects, a lot has been accomplished, but a lot still needs to be accomplished. With the outstanding and accomplished colleagues that are based at ICLA and the numerous partnerships that have been nurtured, I believe that together as a collective, we will continue to pursue the ambitious vision that ICLA was set up to accomplish. My first task therefore will be to engage all my colleagues and stakeholders of ICLA and the Faculty of Law at large to see how we can continue to pursue ICLA’s mission in a manner that will ensure that UP Law remains the best in Africa. I am confident that as a collective, we will move ICLA to the next level.

Are you planning to expand its Africa and international footprint, and if so, how?

During the past ten years ICLA has established a solid African and international presence and footprint through the extensive research that it has conducted and published. We can boast that there is no other research institute in Africa that has done this. However, there is no reason for us to be complacent and relax. We haven’t yet done a 10 years’ evaluation, but that is probably where we will start to assess how much we have accomplished and how we can improve on this. Nevertheless, it is clear to me at this stage that one of the major challenges that we still face in Africa is the lack of adequate understanding of the diverse legal traditions that exist on the continent. As a result of the commonality of our economic, social and cultural challenges, I believe that an intensification of knowledge sharing and cross-fertilisation of ideas from our diverse experiences will put us in a better stead to resolve our common problems. We will therefore in the next few weeks assess how far we have come and see how we can build on our successes in order to consolidate and sustain our African and international footprint. I suspect that cross-systemic legal research to promote a greater intra-Africa legal dialogue will be one of those things that will preoccupy us in the partnerships that we develop for the future.

You have big shoes to fill.  How do you feel about this?

Talking about big shoes to fill: they don’t come any bigger. I must say that I am indeed profoundly humbled and deeply touched that the University Council, in all its wisdom and in spite of my resistance have forced my feet into these big shoes. My consolation is that I have an energetic and inspiring leadership in UP Law, in the person of Dean Professor Elsabe Schoeman and Director of the Centre for Human Rights, Professor Frans Viljoen, to support me.  However, over and above all, I have an exceptional group of scholars at ICLA with whom we shall be able to move the institute to higher heights. I do not want for one moment to underestimate the enormity of the task that I have taken on. Enormous tasks and challenges call for enormous effort and I am confident that I have this. Nevertheless, the towering spirit of Christof, his dreams, his ambitious and his achievements will certainly inspire all of us at ICLA. Together as a collective, we are up to the task and we shall keep ICLA ahead of the game.