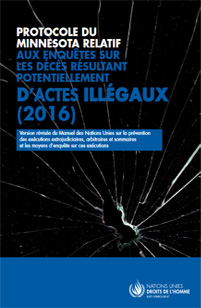 The use of the term ‘Protocol’ reflects the forensic medicine element of the document rather than its legal status. In 2016, after a two-year process of revision, the new version of Minnesota Protocol was finalized by an international group of experts convened by the UN Special Rapporteur on extrajudicial, summary or arbitrary executions, and the Office of the United Nations High Commissioner for Human Rights (OHCHR). The revised version was published by the OHCHR in 2017.