International Day of UN Peacekeepers: Peacekeeping, capacity to protect, and responsibility while protecting 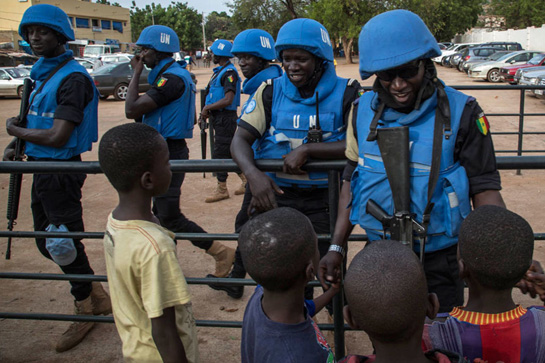 Peacekeeping is a tool, among many others, whose objective is to foster peace and facilitate a transition from conflict to peace. In this process, peacekeeping can help in the protection of civilians often caught in the crossfires of a conflict not of their making. Yet peacekeeping, for all the good it does and can do, is not without its challenges. For one thing, peacekeepers are often placed in harm’s way without adequate resources. There have been far too many cases where peacekeepers, outnumbered by a party to a conflict, have watched helplessly while innocent civilians have been killed. In 2000, the Report of the Panel on United Nations Peace Operations, called the “Brahimi Report”, identified a lack of resources and the need to strengthen the peacekeeping mandates as weaknesses in the UN system preventing the UN from meeting its principal objective of “saving succeeding generations from the scourge of war”.

While budgetary constraints remain an issue, the mandates of UN peacekeeping have become more robust, permitting peacekeepers to proactively use force in order to protect civilians. The UN reports that over 90% of its existing peacekeeping mandate contains a mandate for the protection of civilians. In fact, the UN has recently experimented with an even more robust form of “peacekeeping” with the establishment of what was called the Force Intervention Brigade in the Democratic Republic of the Congo – a mandate in which South Africa played a leading role.

Yet there is another side to peacekeeping. An uglier, more insidious side, which also requires greater attention. The problem of sexual abuse and exploitation by UN peacekeepers is one that is well-documented. The UN General Assembly has even established a committee, which incidentally I chaired from 2011 to 2012, that considered, amongst other options, the possibility of a treaty to address the problem of accountability of UN peacekeepers on Mission. One of the greatest contributors to the problem is the impunity gap, which is the inability of the situation country to exercise criminal jurisdiction over offenders and the fact that the UN itself is unable to exercise such jurisdiction. In the case of South Africa, legislation exists, which permits the authorities to prosecute South African peacekeepers who commit sexual offences while on mission – whether any prosecutions is less clear. The rather broad civil immunity with which the UN covers its operations is a separate problem. This immunity prevents victims of crimes committed by the UN peacekeepers on mission from instituting civil claims against the UN.

It has been 21 years since the birth of UN peacekeeping. In that time, we have strengthened the peacekeeping mandates to make them more responsive to the needs to protect civilians from warring parties. There is still much work to do on this front, but there has been noticeable progress. Yet, we have not made similar strides in promoting accountability where UN peacekeeping missions are responsible for abuses against the population. We have not done enough to make sure that peacekeepers stay true to the mantra of responsibility while protecting.

As we commemorate the International Day of UN Peacekeepers, and we remember those peacekeepers who fell while protecting civilians, we need to promote accountability, both of individual peacekeepers and the institutions under which they serve, when peacekeepers are themselves the source of abuses.