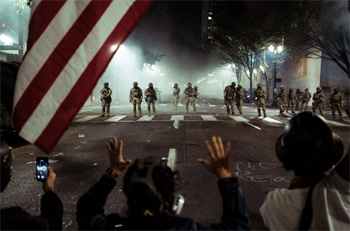 GENEVA — Law-enforcement authorities are obligated to protect and facilitate peaceful demonstrations, an influential United Nations human rights panel said on Wednesday, challenging tactics the police have used against anti-racism protests in American cities and around the world.

The international treaty governing civil and political rights requires states to allow peaceful demonstrations, not to block or disrupt them without a compelling reason, the United Nations Human Rights Committee said. Authorities should also seek to de-escalate situations that might lead to violence and to use only the minimum force necessary to disperse crowds.

“A failure to respect and ensure the right of peaceful assembly is typically a marker of repression,” the panel said in its finding.

The committee of 18 international law experts monitors compliance with the International Convention on Civil and Political Rights, a cornerstone of human rights law signed by 173 countries, including the United States.

The panel’s comment, a product of more than two years of deliberations, sets out international guidelines that speak to issues central to America’s deepening discord over the Trump administration’s response to the Black Lives Matter protests in Portland and elsewhere. The protests in Portland and elsewhere swelled after the administration dispatched federal law enforcement officials to confront demonstrators over the objections of local officials.

On Wednesday, Gov. Kate Brown of Oregon said the U.S. government had agreed to remove tactical teams that had been deployed to Portland, and that the state would provide extra security for the federal courthouse in the city.

The panel’s findings are not legally binding. But the timing of the comments thrusts the U.N. into a divisive debate roiling the United States during the heat of a presidential campaign.

The U.N. panel said that law enforcement authorities should facilitate demonstrations and restrict the use of force to control or disperse protesters. It said crowds should be dispersed “only in exceptional cases” and after the authorities have exhausted nonviolent means to de-escalate tensions.

“It is a fundamental human right for individuals to join a peaceful assembly to express themselves, to celebrate, or to air grievances,” said Christof Heyns, a law professor at South Africa’s University of Pretoria and the panel member who drafted the document. “Together with other rights related to political freedom, it constitutes the very foundation of a democratic society.”

The United States, while endorsing some of the committee’s guidance, said in a commentary that the panel’s observations were “beyond its competence and mandate and contrary to international law.”

The panel said military or paramilitary forces should not be used to police gatherings except in extraordinary circumstances and that concealing the identity of the police, a practice followed by federal agents in unmarked vehicles in Portland, undercut accountability.

It also took aim at the use of tear gas, which has been heavily used by law enforcement agencies in Portland and elsewhere. It said tear gas should only be used as a last resort, and that rubber bullets should only be fired in response to an imminent threat of death or serious injury.

The committee also asserted the “particular importance” of journalists and human rights defenders in monitoring demonstrations, emphasizing they should not be harassed or their equipment confiscated or damaged. Even if violence erupted to a point that justified dispersing a crowd, it did not justify dispersing journalists.

“All of these are lessons that the government of the United States should be taking very much to heart,” said Gerald Neuman, a professor of international law at Harvard University who served on the committee.

Human rights experts said the panel’s findings put a critical spotlight on the actions of federal agents in Portland and other cities and reinforce concerns that the heavy-handed policing there falls far short of international standards.

“There are serious questions as to whether the administration’s response in Portland is sufficiently de-escalatory, respectful of rights, discerning about differences between peaceful and violent protesters, restrained in the use of force and weapons,” said Harold Hongju Koh, a Yale Law School professor who served as the State Department’s legal adviser in the Obama administration.

“Of special concern is whether the federal agents being deployed have appropriate training,” he added.

Nick Cumming-Bruce reports from Geneva, covering the United Nations, human rights and international humanitarian organizations. Previously he was the Southeast Asia reporter for The Guardian for 20 years and the Bangkok bureau chief of The Wall Street Journal Asia.

A version of this article appears in print on