Press release: Families of West African migrants seek to finally get justice after 15 years of disregard, neglect and political inaction 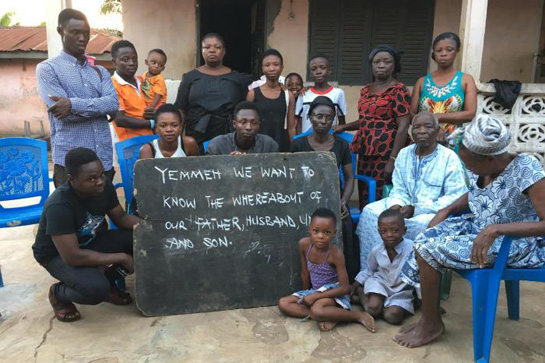 With legal support from the Sterling Centre for Law & Development, the families of West African migrants assisted by ANEKED, filed complaints on November 18 against the governments of Ghana and The Gambia before the ECOWAS Community Court of Justice for infringing several international human rights, including the right to judicial remedies.

In July 2005, in one of the most brazen display of impunity by the Jammeh regime, approximately 44 Ghanaian migrants as well as some 12 other West Africans (from Nigeria, Senegal, Togo, and Côte d’Ivoire) including two women (one reportedly pregnant) were forcibly disappeared in The Gambia while on their way to Europe by sea. A Gambian national, Lamin Tunkara, purported to have been their smuggler also suffered the same fate. The migrants were never heard from again except for one who managed to escape and alert authorities across the border in Senegal.

Following the enforced disappearances and for years afterwards, Ghanaian and Gambian civil society organisations have joined forces with the sole survivor and families of those disappeared to campaign for those responsible to be held accountable in fair trials, however their demands have fell on deaf years. Despite pledges by both governments in 2009 to “pursue through all available means, the arrests and prosecutions of all those involved” no significant steps have been taken to back the rhetoric, even as evidence has emerged that the migrants were murdered, by the “Junglers”, a death squad reporting directly to former President of The Gambia Yahya Jammeh. Additionally, five different United Nations human rights monitors have expressed concerns to both governments at the lack of credible investigation carried out thus far.

“Nobody should have to wait 15 years to get justice for such serious human rights violation. The silence and inaction from both governments only serves to fuel impunity and lack of transparency surrounding the enforced disappearance of the West Africans. The families left behind continue their search for truth and justice," said Nana-Jo N’dow, Founder and Executive Director of ANEKED.

"It is time a thorough, independent and credible investigation into this incident is conducted by a competent legal authority and that governments take up their responsibility to fulfil the rights of the deceased migrants and their families who deserve nothing short of truth, justice and accountability" - Nana-Jo N’dow

The complaints, which benefitted from inputs provided by the “Freedom from Violence Project” of the Centre for Human Rights, University of Pretoria, also put a spotlight on the complex phenomenon of enforced disappearance in the context of migration. All migrants have human rights, no matter how or where they move. Furthermore, relatives of the disappeared have the right to know the full and unadulterated truth about the fate of their loved ones and obtain reparations regardless of their migratory status, gender or nationality.

The African Network against Extrajudicial Killings and Enforced Disappearances (ANEKED), is a victim-led organisation which campaigns against enforced disappearances and extrajudicial killings, advocating for justice for victims and their families as part of concerted efforts to bring Yahya Jammeh and his accomplices to justice (#Jammeh2justice) for the atrocities committed during his 22 years of dictatorial rule.

More information about the migrants case: