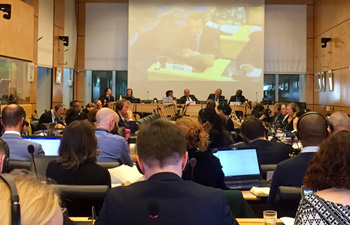 On 20 March the UN Human Rights Committee (HRCtte) dedicated a half-day of their current 125th session to hearing from civil society and expert stakeholders who had made written contributions concerning their next general comment, which will be on the right to peaceful assembly.

The HRCtte is one of the UN’s “treaty bodies”, and overseas the implementation of the International Covenant on Civil and Political Rights (ICCPR). In addition to receiving state reports and individual petitions, the treaty bodies also periodically adopt “General Comments” which are designed to condense their jurisprudence and provide interpretive guidance on their respective treaties. The HRCtte’s most recent general comment was No.36 on the right to life (Art.6).

The upcoming general comment will be on the right of peaceful assembly, protected by Art.21 of the ICCPR, which reads:

The right of peaceful assembly shall be recognized. No restrictions may be placed on the exercise of this right other than those imposed in conformity with the law and which are necessary in a democratic society in the interests of national security or public safety, public order (ordre public), the protection of public health or morals or the protection of the rights and freedoms of others.

Introducing the general comment, Prof. Christof Heyns, who is acting as Rapporteur for the general comment), said that protest action was a defining part of the modern era and that allowing a platform for peaceful protest within a sensible framework was an integral part of the quest for a more peaceful world.  The drafting process offered a singular opportunity to develop a coherent framework on which to base the future jurisprudence and to examine how new developments in the world impacted this right.  Clearly, he said, assemblies were a “different animal” in the world of instant communications, surveillance, many more forms of less-lethal weapons, and the increasing use of drones in policing actions.

More than 40 organisations from around the world had contributed written briefs to the process, and nearly 20 came to present before the Committee orally, giving the Committee-members the opportunity to ask questions on some of the challenging complexities likely to arise during the drafting process.

Based on the written submissions received and this half-day discussion, the Committee will now develop the first draft of the general comment, which will be publicly discussed in July 2019, with the final version expected by the end of 2020.