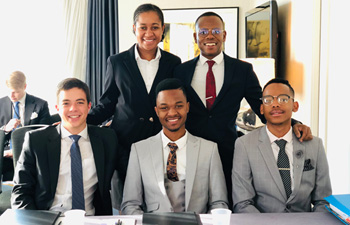 Last year, the University of Pretoria were also the South African champions and finished 5th out of more than 600 law faculties worldwide. The 2018 UP team also won the Elona E Evans award as well as the coveted Richard R Baxter award for their written submissions.

Jessup is the world's largest moot court competition, with participants from law schools in more than 95 countries. The Competition is a simulation of a fictional dispute between countries before the International Court of Justice, the judicial organ of the United Nations.

The Team would like to thank everyone who participated in the preparation of the team, including Professor Christof Heyns; Professsor André Boraine, the Dean of Law; Professor Dire Tladi, Dr S Maslen, Dr M Bradley, Dr Y Meyer, Ms M Gettliffe, the Tuks Moot Society and many others. The team’s participation in Washington DC would not have been possible without the generous financial contributions from the Law Society of the Northern Provinces; MacRobert Attorney’s; Mr Webster (chairperson of Spoor and Fisher, who donated in his personal capacity); the Pretoria Society for Advocates; Professor Fombad from the Institute of International and Comparative Law in Africa and Professor Grove from the Mercantile Law Department at the Faculty of Law.