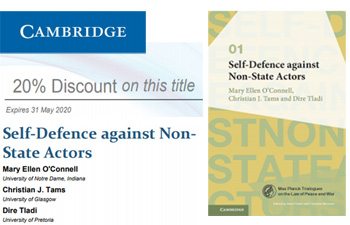 In this book, self-defence against non-state actors is examined by three scholars whose geographical, professional, theoretical, and methodological backgrounds and outlooks differ greatly. Their trialogue is framed by an introduction and a conclusion by the series editors. The novel scholarly format accommodates the pluralism and value changes of the current era, a shifting world order and the rise in nationalism and populism.

It brings to light the cultural, professional and political pluralism which characterises international legal scholarship and exploits this pluralism as a heuristic device. This multiperspectivism exposes how political factors and intellectual styles influence the scholarly approaches and legal answers and the trialogical structure encourages its participants to decentre their perspectives. By explicitly focussing on the authors' divergence and disagreement, a richer understanding of self-defence against non-state actors is achieved, and the legal challenges and possible ways ahead identified.