UP researchers' proposal to give South stronger role at UN implemented 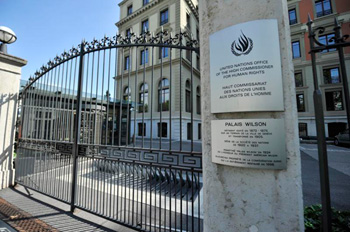 A number of Univeristy of Pretoria researchers have been arguing that the United Nations human rights system will be more effecitive - with more visibility and greater global ownership - if the bodies monitoring human rights compliance by states meet not only in Geneva, but also in other parts of the world when monitoring compliance. Samoa will now be the first country to implement this proposal, when they host the Committee on the Rights of the Child there next year. According to Prof Christof Heyns, a member of the UN Human Rights Committee, this will in particualr allow countries from the South to engage more directly and on a more eqaul footing with the system.

Prof Heyns and Frans Viljoen, from the Centre for Human Rights, originally made the proposal for such meetings 20 years ago in a report on the impact of the UN human rights treaty system for the then High Commissioner for Human Rights, Mary Robinson. According to Heyns, ’We got the idea from the practice of the African human rights system, which holds some of its meetings in different countries in Afirca. The UN was probably not ready yet for the idea when we fist proposed it. There was in particular uncertainty about the practical implications. The UN is a conservative organisation in many respects, and is not always keen to embace new ideas overnigt. So my colleague Willem Gravett and I did some further research last year, as the UN is getting ready to reform the treaty system.  We investigated how the regional human rights systems in the Americas and in Afirca have in practice managed to meet in different countries, and we were able to dispell some concerns and to make some suggestions about how problems can be avoided, based on these regional case studies.’

Acting Chief Justice of Samoa, Vui Clarence Nelson, one of the members of the Committee on the Rights of the Child, said he is immensely proud to see the body step outside the hallowed Geneva halls. “It has huge implications. You could say Samoa is reforming the U.N treaty body system,” said ustice Vui.

Prof Heyns pointed out that these proposals are part of a broader study which they are conducting into the impact of the UN treaty system in all parts of the world. ’The Centre for Human Rights is conducting a major study, in collaboration with the United Nations High Commissioner for Human Rights, to estbalish to what extent it can be said that the system makes a differnece where it matters most - on the ground level, and how this can be improved. We are working with researchers in many parts of the world - with the support of Harvard and at the Geneva Academy - to do the first comperhensive study on the extent to which the UN system acrtually affects the contents of constitutions, laws, decisons of courts, and policies of countries worldwide. We do hope we will come up with more ideas that can be impimented and that can improve the protection that people need.’

For an newspaper article on the topic, see