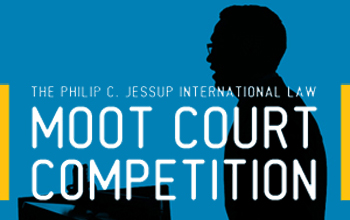 The team representing the University of Pretoria is made up of Mary-Ann Getcliffe (currently completing her LLM), Thomas White (enrolled in his fourth year of a BCom Law), Rohula Bilankulu and Sohela Surajpal (both third year LLB students) coached by Gift Kgomosotho. The team has been tasking with preparing arguments relating to the validity of international arbitral proceedings, the capture of spy drones in a State’s territorial waters, the operation of a nuclear submarine and the use of force against both civilian vessels and warships. The National rounds will take place on the 24th of February, after which qualifying teams will compete in the International rounds in Washington from the 1st to the 7th of April.