Conference on the rule of law in Sub-Saharan Africa: promises, progress, pitfalls and prospects 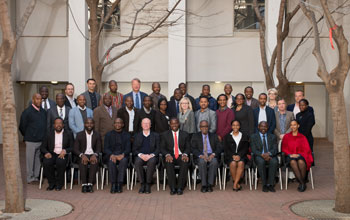 Conference on the rule of law in Sub-Saharan Africa: promises, progress, pitfalls and prospects
29-30 June 2017

This conference which was jointly organized by the Konrad Adenauer Stiftung, Rule of Law Program for Sub-Saharan Africa and the Institute for International and Comparative Law in Africa, Faculty of Law, University of Pretoria, South Africa. The conference sought to identify and discuss the contemporary challenges to, and reasons for the steady decline in the rule of law in the Sub-Saharan region. The conference also looked at possible solutions and the prospects for the future.

Session three focused on the rule of law, discriminatory practices and social inequalities. Mr Tilahun Hudeya examined how large-scale agricultural land acquisitions and Ethiopia’s ethnic minorities constitute a test to the rule of law. Prof E Rudman also analysed the challenge posed to the rule of law by the absence of a committee on the rights of women in Africa.

Session five reflected on measures for monitoring and enforcing the rule of law in Africa. Justice Gerard Niyungeko, Mrs Makanatsa Makonese, Dr Thomes Obel Hansen and Mr Tsega Gelaye all approached this issue from various perspectives. Justice Niyungeko considered the rule of law principles in the jurisprudence of the East African Court of Justice. Mrs Makonese and Dr Hansen examined the role of National Human Right Institutions (NHRIs) and Nairobi Principles on accountability respectively as a means of enforcing and monitoring the rule of law in sub-Saharan Africa. Mr Gelaye then considered the role of the African Union in this respect.

Conclusion and the way forward

The last session, session eight, concluded the two-day deliberations. Dr Eric Kibet summarized the discussions and recommendations of all the presentations. From his presentation, a number of conclusions were reached on the crisis of rule of law in Africa. First, that there is an obvious decline in the rule of law. Second, that the decline goes hand in hand with reversal of democratic gains in various countries and lastly, that this problem is generally not a problem of absence of law but an absence of the culture of respect for the rule of law.

To address these challenges, a number of recommendations were made such as the need for the intervention of AU and other regional bodies, clarification of the concept of rule of law in the sub-Saharan African context and more active participation of the judiciary, electoral commissions, NHRIs and civil society in the enforcement and monitoring of the rule of law in sub-Saharan Africa.

Overall, the conference succeeded in achieving its aim of identifying challenges to the rule of law in Africa and making recommendations towards reversing this disturbing trend. The presentations were focused, incisive and specifically addressed each of the sub-themes of the conference.