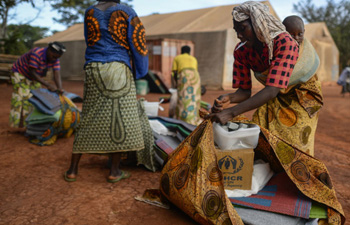 Photo credit: UNHCR/Benjamin Loyseau  | More than a quarter of a million Burundians have fled to neighbouring countries since April 25, 2015, most of them to Tanzania. Nduta refugee camp is located in north-western Tanzania and can barely provide shelter, latrines and showers to every refugee.

Concluding their second visit to Burundi, a team of United Nations independent human rights experts welcomed certain improvements in the country, but warned that the recent “calm should not be confused with long term stability,” and also called on all parties in the country to stop the use of violence as a political tool.

The team reported a significant drop in the number of executions since the beginning of the year as a positive step, but also stated that the shrinking space for civil society actors remains a cause for concern.

Christof Heyns, one of the three independent experts and the Head of the UN Independent Investigation on Burundi (UNIIB) said that for the country to move away from conflict, an inclusive political dialogue addressing the roots of the political crisis is needed. He also called for the broadening of the recent talks in Arusha and Brussels to ensure that all actors of the crisis are included.

The team also expressed concern that many political prisoners remain in jail and that a new pattern of mass arrests has emerged, mostly affecting ordinary people, including children. “In various parts of the country, school children have been arrested or suspended from school because their books had scribbles on pictures of the Head of State. Some of them face the prospect of spending five to 10 years in jail. We will continue to closely follow these cases, including the actions taken by the National Human Rights Commission on them,” said Heyns.

The team said that it looked forward to working further with the Burundian authorities and society to strengthen human rights protection in the country.

The UNIIB was established by the UN Human Rights Council in December 2015 to investigate human rights violations and abuses in Burundi, make recommendations on the improvement of the human rights situation, and engage in a dialogue with the authorities and other relevant actors in the ongoing crisis. It is scheduled to submit its final report to the Council in September 2016.

Burundi was thrown into crisis more than a year ago when President Nkurunziza decided to run for a controversial third term that he went on to win. To date, it has been reported that hundreds of people have been killed, more than 240,000 have fled the nation, and thousands more have been arrested and possibly subjected to human rights violations.