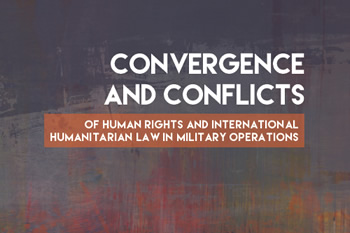 The publication 'Convergence and Conflicts of Human Rights and International Humanitarian Law in Military Operations' (edited by Erika de Wet and Jann Kleffner and published by the Pretoria University Law Press) is now available online.

The book explores the implications of the increased interplay between international human rights law (IHRL) and international humanitarian law (IHL) in military operations, sometimes in ways that imply convergence and other times in ways that suggest conflict. These convergences and/ or conflicts are particularly acute in non-international armed conflicts, situations of belligerent occupation and in the area of peace support operations (PSOs). Non-international armed conflicts imply that individuals, including members of organized non-state armed groups and civilians that directly participate in hostilities, are ‘within the jurisdiction’ of the territorial state against whom they are fighting. IHRL and IHL may therefore apply in parallel. In a similar vein, the control exercised by a belligerent occupant regularly entails an exercise of ‘jurisdiction’ and hence triggers the applicability of human rights norms. As far as PSOs are concerned, it becomes increasingly difficult to classify them as taking place in a context of ‘peace’ or ‘armed conflict’. More often than not, the situation implies elements of both.

In all of the aforementioned contexts, the interplay between the fields of IHRL and IHL as the areas of law that provide the most pertinent regulatory frameworks for the conduct of pertinent actors – states, international organisations, organised armed groups and individuals – is elevated to great practical significance. This edited volume contains 16 peer-reviewed essays by academics and practitioners.