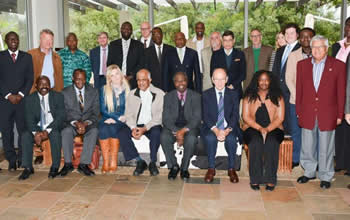 Call for papers: Third Stellenbosch Annual Seminar on Constitutionalism in Africa (SASCA 2015) which will be held in Stellenbosch (South Africa) from Wednesday 16 September to Friday 18 September 2015.

The theme for this seminar is “Constitutional adjudication in Africa.”

About the Annual Seminar

The constitutional reforms that have been taking place in African since the 1990s has attracted a lot of international attention and aroused the interest of many scholars, especially political scientists and legal scholars. Although many of these scholars have commented on the general nature of these reforms, not much attention has been paid to the changing role of courts especially with respect to constitutional disputes. Yet one of the fundamental causes of the undermining of constitutionalism in post-independence Africa were the restrictions that prevented courts from intervening when constitutions were violated in some countries and the fact that the judiciaries in most countries were reduced into handmaidens of the various dictatorial regimes in place. As a result, they were weak and ineffective and thus incapable of operating effectively either as guardians of the constitutions, protectors of human rights or impartial enforcers of the rule of law. However, since the 1990 wave of constitutional reforms, the role of constitutional courts or courts exercising the powers to interpret and apply constitutions have become a critical aspect of promoting constitutionalism.

The theme for the third seminar in the SASCA series is premised on the fact that Africa now provides an excellent example of the interplay of the diverse forms of constitutional review models and the prospects for new developments in constitutional adjudication. Over the last two decades some of these courts have been asked to decide a litany of hotly contested social, political and economic questions. As the list of areas in which these courts intervene has grown, so too have their powers, actual or potential. By identifying the different models of constitutional review that have been adopted in the last two decades, this seminar seeks to investigate the different ways in which these courts are contributing to enhancing constitutionalism and respect for the rule of law on the continent. The seminar will also examine the extent to which the long-standing image of African courts as powerless, unimportant and irrelevant when faced with constitutional violations has been overcome.

The discussions will combine, inter alia, a number of country specific studies which illustrate the different constitutional review models on the continent, comparative studies on certain sub themes which cut across the different constitutional traditions and an attempt to understand how some of the more successful constitutional courts or courts exercising a constitutional jurisdiction operate. Although progress is uneven and there still remains, in many African countries, a wide gap between what the constitutional texts provides for and what actually happens in practice, such a comparative study is still very important. The numerous issues that will be interrogated during the seminar will provide a basis for identifying new trends, challenges, lessons, opportunities and future directions.