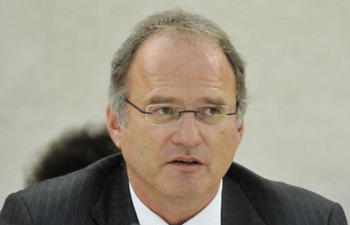 An independent United Nations human rights expert today strongly condemned the recent execution of nine people in the Gambia, and called on the Government to refrain from executing an additional 39 people reported to be on death row.

“This stream of executions is a major step backwards for the country, and for the protection of the right to life in the world as a whole,” said the UN Special Rapporteur on extrajudicial, summary or arbitrary executions, Christof Heyns.

The expert recalled that the country was at the forefront in the region’s efforts to abolish the death penalty in law and practice, with a moratorium on the death penalty for 27 years and the abolition of capital punishment for drug offences in April 2011.

The prisoners were shot dead by firing squad on Sunday, according to media reports that cited the country’s interior ministry. President Yahya Jammeh had reportedly vowed to kill all death-row inmates by mid-September.

Prior to the nine executions carried out on 26 August, the last official execution in the West African nation took place in 1985, according to a news release issued by the Office of the UN High Commissioner for Human Rights (OHCHR).

Mr. Heyns also voiced concern that death sentences were imposed in violation of major international standards, including the most serious crimes provisions.

“According to available evidence the trials did not meet due process safeguards,” he underscored. “The executions were carried out in secrecy, away from the public and from the families, and do not meet the requirements of transparency.”

Independent experts, or special rapporteurs, are appointed by the UN Human Rights Council to examine and report back, in an unpaid capacity, on specific human rights themes.