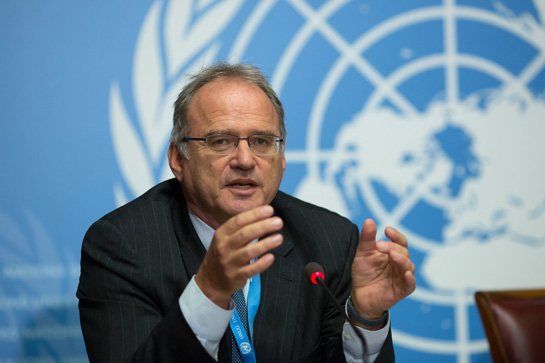 The United Nations Human Rights Committee last week adopted comprehensive standards on the way in which States should deal with peaceful assemblies. These guidelines are authoritative for the 173 States in the world that have ratified the Covenant on Civil and Political Rights.

The 18-member committee of international experts adopted the General Comment as the culmination of a two-year process. The process was led by Professor Christof Heyns, former Director of the Centre for Human Rights, current Director of the Institute for International and Comparative Law in Africa at the University of Pretoria and a member of the Committee. He was supported by colleagues in the Faculty of Law and a doctoral student from Kenya.

According to Heyns, demonstrations have become one of the key tools of social change worldwide in the latter part of the past century. “If anything, the events of the last couple of months has shown that this is a trend that will continue. Demonstrations are, in many cases, an important tool to renegotiate the social contract. Mass demonstrations have brought about some of the most important changes in our world in the past 50 years. But where things go wrong, it leaves deep scars.”

According to Heyns, the way in which assemblies are conducted today raises a number of questions on which the UN had to provide guidance.

“When is an assembly no longer peaceful? And what can the authorities do under those circumstances?” According to Heyns, the basic approach is that the violent actions of some members of the crowd cannot be attributed to the non-violent ones.

A particularly pertinent problem that the Human Rights Committee had to address was whether online gatherings are also protected by the right of peaceful assembly. “We are used to people gathering in the streets, and in a way putting their bodies on the line when they demonstrate. But what about the #metoo movement, for example: are they protected? Can the internet be shut down to stop them?”

“Many of us – including myself – were initially sceptical about accepting that meetings where no-one was physically present could qualify as protected assemblies. However, as we did more research and consulted more widely, we saw that online meetings are an integral part of how assemblies work today. So the new text recognises that they are protected.”

A further question was to what extent assemblies held in private spaces – for example, shopping malls – are protected. In terms of this guidance, such assemblies are in principle protected, but restrictions may be put in place in order to protect the rights of the property owners or other users.

According to Heyns, “A wide range of new so-called less-lethal weapons are available today. These weapons are often abused, and it became necessary to develop clear standards for the use of weapons such as teargas, rubber bullets and Tasers.” The new guidelines on assemblies draw heavily on UN guidelines on less-lethal weapons, released last month by the UN, following a process which Heyns also led.

Under-cover or “plainclothes” police officials may in exceptional cases be deployed by the authorities, but, according to the new guidelines, they have to identify themselves if they attempt to arrest anyone or use force.

The adoption of the new General Comment was not only novel as far as setting out comprehensive guidelines on the issue of public assemblies is concerned, but also as far as the way in which it was adopted. It is the first instrument of international law that was adopted through an online process.

During the past month the 18 members of the Committee, who are based in countries as far away as Japan and the Caribbean, met online every day, using English, French and Spanish to complete the final phase of the adoption of the General Comment.

During the past two years Committee members participated in global consultations on the management of assemblies. Written and oral submissions were received from 24 States, including three permanent members of the UN Security Council. More than 100 international bodies, NGOs, academics and others also made submissions, and Committee members attended consultations in Mexico City, Bangkok, Warsaw, Cambridge and Johannesburg.

“The importance of the General Comment lies in the norms that it sets out. To ensure its much-needed impact on the ground, it has to be implemented by the UN member states,” Prof Heyns said. “The next step is for these standards to find their way into the domestic laws of all the countries in the world.”