The Right of Peaceful Assembly: UN Committee Weighs in on the ‘Age of Protest’ 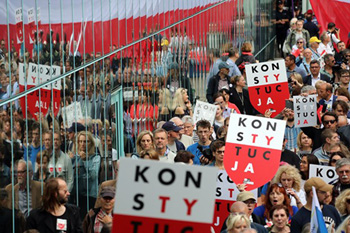 The Human Rights Committee recently issued a first public draft of its next General Comment (No. 37) on the right of peaceful assembly, as protected under Article 21 of the International Covenant on Civil and Political Rights (ICCPR). The Committee has asked for public comments before they finalize the document in 2020. This is an important opportunity. Public comments have often affected the final version of the text of General Comments.

The focus on assemblies is obviously timely given recent events in Bolivia, Chile, DR Congo, France, and Hong Kong, to name but a few. As the draft General Comment recalls, “Where they are used to air grievances, peaceful assemblies may create opportunities for inclusive participatory and peaceful resolution of differences.” In some instances, of course, violence is what actually transpires, whether that is provoked by the protesters or the police.

The vast majority of states recognize the right of peaceful assembly in their respective national constitutions: no fewer than 180 of the 193 UN member states do so – more than recognize a constitutional right to life! Accordingly, where gatherings become violent, they no longer fall within the scope of peaceful assemblies and are therefore no longer protected by Article 21 of the Covenant. “Violence” is defined as use by participants of “physical force that is likely to result in injury or death, or serious damage to property;” mere “disruption of vehicular or pedestrian movement or daily activities” is expressly excluded from the definition of violence. The carrying by participants of objects that are or could be viewed as weapons is also said to be “not necessarily sufficient” to render the assembly violent. As the draft Comment makes clear, even though a violent assembly is not protected, participants still retain their other fundamental rights: most notably to life, to freedom from cruel, inhuman or degrading treatment, to protection from arbitrary detention, and to non-discrimination.

The second section of the draft Comment sets out the scope of the right of peaceful assembly. It provides that, in order to qualify as an “assembly,” there must be a “gathering of persons with the purpose of expressing themselves collectively.” A single protester is not protected under Article 21 though he or she enjoys “comparable protections” under the Covenant, such as under Article 19 on freedom of expression. Assemblies can be held on publicly or privately-owned property. And while it touches on “online” assemblies, the focus of the draft is, correctly, on physical gatherings.

With respect to assemblies that involve hate speech, the draft offers two alternative options. Option 1 holds that the scope of Article 21 is clarified by Article 20 of the Covenant, which requires states parties to prohibit propaganda for war and advocacy of national, racial or religious hatred that constitutes incitement to discrimination or hostility. Option 2 proposes to address the need to act against incitement of discrimination or hostility in a later section in the General Comment: as restrictions that require justification.

The third section of the draft Comment describes in greater detail the obligations of states parties to the ICCPR with respect to the right of peaceful assembly. These include the duty to allow the participants “freely to determine” the purpose or expressive content of the assembly. Participants must also, “as far as possible,” be able to assemble within “sight and sound” of the target audience.

The content of the duty to “facilitate” peaceful assemblies, means that the authorities have to “promote an enabling environment” for the exercise of the right of peaceful assembly and put in place “a legal and institutional framework within which the right can be exercised effectively.” This may demand that streets are sometimes blocked off, traffic redirected, and security provided. This should be at the cost of the state, not the assembly participants.

The “interests of national security” is a ground that is often abused by authorities in practice. Thus, according to the Committee, the high threshold posed by this ground will only exceptionally be met where assemblies are peaceful. Moreover, “where the very reason that national security has deteriorated is the suppression of human rights,” this deterioration “cannot be used to justify further restrictions” on rights, including to assemble peacefully.

More broadly, restrictions cannot be imposed to stifle expression of political opposition to a government, or even political independence for part of the country. Restrictions should not be used to prohibit insults to the honor and dignity of officials or state organs. Expect to see pushback from some states to these affirmations by the Committee.

The sixth section concerns the “duties and powers of law enforcement agencies”: the sharp end of the stick as it were. The draft Comment holds that where the presence of the police is needed, the intention should be to enable the assembly to take place as planned, “and with a view to minimizing the potential for injury to any person and damage to property.” In any event, all use of force must comply with the fundamental principles of legality, necessity, proportionality, precaution and non-discrimination applicable to the rights to life and freedom from inhumane treatment under the Covenant, and those using force must be accountable for each use of force.

Kettling is not inherently unlawful according to the draft Comment. But such containment, where law enforcement officials encircle and close in a section of the demonstrators, “may be used only where it is necessary and proportionate to do so, in order to prevent violence during an assembly.” Likewise, only in exceptional cases may an assembly be dispersed. This may occur if the assembly is no longer peaceful, or if there is clear evidence of an imminent threat of serious violence. Firearms are not an appropriate tool for the policing of assemblies and “must never be used simply to disperse an assembly.” Accordingly, police must be suitably equipped with, and trained in the use of, less-lethal weapons.

The seventh section briefly addresses assemblies during states of emergency and armed conflict. If not derogated from, the right of peaceful assembly continues during states of emergency, as the Comment recalls. It is noted, though, that civilians participating in an assembly during an armed conflict “are not protected from being targeted with lethal force, for such time as they are participating directly in hostilities, as that term is understood under international humanitarian law, and to the extent that they are not otherwise protected under international law from attack.” This was a controversial issue during the Gaza fence protests that began at the end of March 2018 and the resultant Commission of Inquiry report following the shooting of many protesters by Israeli forces.

The eighth and final section considers the relationship between Article 21 and other provisions of the Covenant and other legal regimes. Participants in peaceful assemblies must not infringe on the rights of others. This is the only section that touches on possible duties of assembly participants.

Comments on the draft General Comment No. 37 must be submitted in a Word file by 14 February 2020 to  This email address is being protected from spambots. You need JavaScript enabled to view it. . In March the Committee will arrange discussions with representatives of states as well as civil society. This is going to be an important new document from the Human Rights Committee, following on from their 2018 General Comment on the right to life. It is a strong piece of work, which hopefully will not be watered down during the second reading, which is expected to culminate in the adoption of the new general comment by the end of 2020.

Image: People demonstrate to support the Polish Supreme Court Justice president in front of the Supreme Court building, on July 4, 2018 in Warsaw. – Poland’s chief justice Malgorzata Gersdorf refused to step down and showed up for work on July 4, defying a controversial new law by the right-wing government which requires her and other senior judges to retire early. (Agencja Gazeta/Slawomir Kaminski via REUTERS)