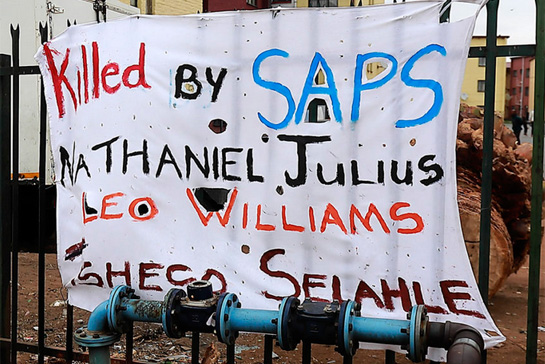 Two children have died at the hands of police in South Africa during the last week. Both of the children were innocent of any crime.

In the case of 9 year old Leo Williams, who was caught by a stray rubber bullet when police opened fire on protestors during a service delivery protest in St Helena Bay, he was not even involved in the protest action. News reports indicate he was playing indoors when this occurred. The police say Nathaniel Julies, a 16 year old boy with down syndrome, was shot in the crossfire when they opened fire on gangsters. Family members say that he was shot by police when he failed to answer questions. Full investigations by the Independent Police Investigative Directorate will hopefully reveal the full stories. But so far we know enough to say that these were two eminently avoidable deaths. We also know the deaths were caused by the use of force by police involving lethal weapons.

At the international level, the United Nations requires states to equip law enforcement officers with less-lethal weapons, and to provide training for their appropriate use. Earlier this year the UN provided detailed standards through  the UN Human Rights Guidance on Less-Lethal Weapons in Law Enforcement.  Law enforcement officials worldwide are required to give special consideration to the effect of force on the vulnerable, including children and those with disabilities.

In the case of Nathaniel Julies two police officers have been charged with murder, defeating the ends of justice, discharging a firearm in a public space and unlawful possession of ammunition. This suggests that the evidence points to a gross overuse of force in this case. A conviction and appropriate penalty will provide some justice, but the prevention of future deaths and the assertion of the value of each individual life depends on adequate training, and on changing the prevailing culture on the use of force. In 2016, in the case of Raduvha v Minister of Safety and Security the Constitutional Court ruled that when considering the arrest of children, a police officer must apply the principle of the best interests of the child. The Court indicated that the policing culture of the past had to be left behind, and that children should be treated as children, with care, compassion and empathy.

The UN Guidance on Less-Lethal Weapons in Law Enforcement are particularly important for the policing of protests and mass demonstrations – the very situation that caused the death of Leo Williams. The Guidance re-iterates the point that firearms are not an appropriate tool for the policing of assemblies, and ‘the use of firearms to disperse an assembly is always unlawful.’  If police must resort to the use of force, then weapons such as batons, pepper spray, tear gas, water cannon and TASERs might be deployed, although even when it comes to these weapons the basic principles remain: they must only be used when force is strictly necessary and proportionate. Excessive force is unlawful force. And states have a duty to take precautions to prevent situations where deadly force may be required in the first place and to minimise its impact on bystanders. If any of these kinds of less-lethal weapons had been used instead of firearms in policing the St Helena Bay protestors, Leo would probably still be alive.

This also raises the broader issue of the way police should deal with children who participate in assemblies.  Children may be involved in protests either indirectly (because they are accompanying their parents) or directly – where they themselves are participating as protestors – something we have seen happening increasingly around the world and in South Africa. In 2017 the Committee on the Rights of the Child held a day of special discussion on protecting and empowering children as human rights defenders, where the importance of freedom of peaceful assembly for children was high on the agenda. This year, the Committee on Human Rights issued a General Comment on the right to peaceful assembly, making the point that people of all ages have the right to participate in peaceful assemblies, and that policing practices must protect bystanders.

The South African Constitutional Court has expressly considered children’s rights in the context of protest. In 2018 in the case of Mlungwana v the State, the court observed that by virtue of their unique station in life the importance of the right to protest ‘has special significance for children who have no other realistic means of expressing their frustration’ due to the fact that they do not have the vote. As the court noted, this is internationally acknowledged in instruments such as the Convention on the Rights of the Child and the African Charter on the Rights and Welfare of the Child. It is a fact that children are going to be directly or indirectly involved in the more than 12,000 protests that take place in South Africa every year, or are likely to be in the vicinity. This reality means that the police will have to adjust their way of operating, so that they can secure the safety of children in and around demonstrations.

A crucial moment in South African history is often captured in one emblematic picture – a photo taken by Sam Nzima, who died earlier this year, of Hector Pieterson, shot by police, being carried by Mbuyisa Makhubu, with Antoinette Sithole running alongside. Let us relegate the deaths of children at the hands of the police to history, once and for all. No more children should die as a result of the use of lethal weapons in the hands of the police. DM/MC