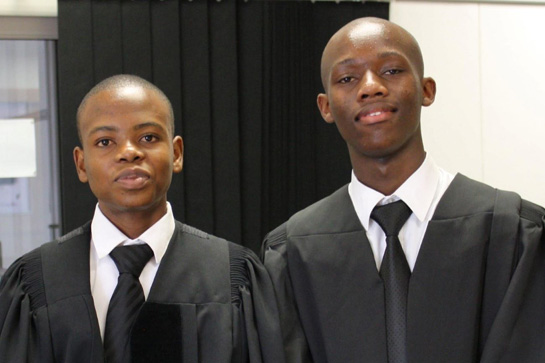 This is M&G’s publication on Malematja:

Attorney and sessional lecturer, Right2Protest Project at Centre for Applied Legal Studies, University of the Witwatersrand

As an attorney at the Right2Protest Project, Stanley Malematja is committed to using the law to make a change in the lives of the most marginalised people in South African society. His goal is clear: “The respect, protection, promotion and realisation of human rights. Poor service delivery must be an issue of the past.”

Malematja’s achievements have been accomplished through hard work and no shortage of talent. This was entirely evident during his studies, when he was named as the overall winner at the 6th Annual Child Law Moot Court Competition in 2015, and when he received the prestigious Danie en Chrissie Dörfling Floating Trophy from the University of Johannesburg for the next year’s edition.

Now, as a sessional lecturer at the University of Witwatersrand, and through his work at the Right2Protest Project at the Centre for Applied Legal Studies, Malematja is committed to changing paradigms surrounding protests, and helping them to become more effective.

This is achieved by providing legal assistance to community groups and protesters across the country, running workshops on how to protest peacefully and legally, filing bail applications for arrested protesters, and referring matters to member civil society organisations when cases go to trial.

“Peaceful protest actions must be seen as an effective method of public participation, key to any democratic state, as opposed to being perceived as an anti-government movement,” Malematja says.

With global events in 2020 illustrating the necessity and effectiveness of peaceful protest movements to enact real change, the work that Malematja and Right2Know do could not be more relevant and important.’

And their publication on Kgomosotho:

Not many people can say that they have addressed a United Nations conference on the prevention of human rights abuses, spoken on queer- and gender-based violence at the African Commission on Human and Peoples’ Rights or coached a national moot court team representing South Africa, and won. Lawyer Keketso Gift Kgomosotho can lay claim to these achievements and more — although some of his biggest lessons have come from his failures, rather than successes.

“I had been working for a number of years to get into a specific programme, and I was rejected. It dealt a devastating blow to my plans, many of which were dependent on this. I can look back on it now with some distance and perspective, and realise that failure, loss and travail are ordinary parts of the imperfect human existence. You can be good, and still fail. I’ve started seeing mine and others’ failure as less of a tragedy, and more like building a muscle, for future battle.”

As an international law scholar and through his work with moot court projects, he wants to hear more African voices in the drive to eradicate conditions of underdevelopment. He hopes to propose solutions to problems facing South Africa, thereby deepening an appreciation of the Constitution’s values and creating a more tolerant, and responsible citizenry.

With so much on his mind and so much work to be done, does he ever have time to focus on himself?

“I’ve only recently started to appreciate the importance of maintaining a work-life balance, and being intentional with taking care of yourself. If I could, I’d reassure my younger self that all the hard work, and sacrifices will be worth it.”

UP Law posted a few questions to Kgomosotho and he responded as follows:

This is momentous recognition. What are your feelings on being recognised this way?

‘More than anything, this is a very humbling recognition. I am grateful to be recognised in this way and especially to be recognised alongside such amazing young South Africans who are doing so much to transform their respective fields. It feels affirming to have my work recognised in this way. This recognition gave me opportunity to pause and reflect on the journey so far – it has not been easy. In fact, I have had to overcome some serious challenges along the way, and I am grateful that I am where I am today. I am also mindful about the responsibility that often comes with this sort of recognition, and I am looking forward to playing my part in creating a more just society.’

How are you experiencing practical vocation training in practice?

‘Being a candidate attorney at Baker Mckenzie Johannesburg has been quite a rewarding experience. Not only have I learned a lot in a time of global crisis, but I have also had the opportunity to learn from a multijurisdictional perspective as a result of the transnational nature of our work. Although I have spent most of my tenure so far working from home – which comes with its own challenges and benefits, I feel I have already grown so much as a legal professional. I am discovering other areas of the law that interest me and learning about it in practical ways.

Before joining the firm, I worked in the public law/human rights space – most recently with the South African Human Rights Commission (SAHRC). The transition to a corporate environment certainly required a different way of using the law as a tool. While I am excited about building expertise in Corporate and Commercial Law, I am also excited about finding ways to advance social justice causes from within this environment – and thereby strengthening the somewhat tenuous link between business and human rights.’

How have you stayed involved in UP Law and how has your studies and involvement assisted you to attain this achievement?

‘A lot of the work for which I am recognised has been done with the involvement and support of the Faculty of Law at the University of Pretoria. My first involvement with the Faculty was 11 years ago, back in 2009, when I participated in the Schools Moot Court Competition as a high school learner. That is where I first met Professor Christof Heyns who was Dean of Law at the time (image below). It was because of this early mooting experience that I decided to pursue law at UP.

Since then my involvement with the Faculty has evolved and grown fruitfully. Over the years, I have been involved with the Faculty’s moot projects as a participant, a coach, a judge, an ambassador, an organiser and project manager. UP Law has provided a platform (and many times, funding) on which I could do my work with moot courts. We have had great success with moots at the Faculty, including winning the High School International Moot Court twice (2016 and 2020), ranking 5th at the Jessup World Rounds, Winning the overall Best Respondent Written Submissions in the global Jessup in 2018, and finishing in the Octo-Final in 2016. Here I want to recognise the role that Professor Heyns has played – much of this was made possible through his unwavering support.’