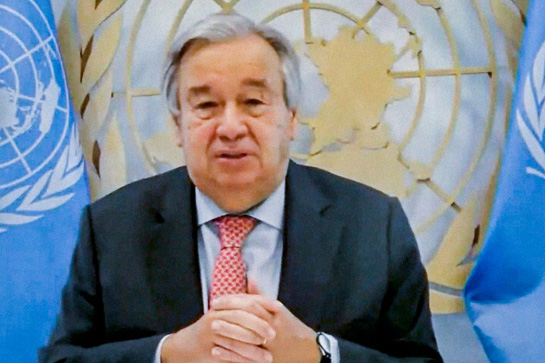 JOHANNESBURG (AP) — In a diminished spotlight because of the COVID-19 pandemic, leading human rights defenders on Friday urged people in these fractured times to connect through politics — and vote, too.

“In many places around the world, participation is being denied and civic space is being crushed,” United Nations Secretary-General Antonio Guterres said on the sidelines of the annual U.N. gathering of world leaders, this year held online.

People must take part in the decisions that affect their lives, he said, noting “new heights” of inequalities and and warning: “The window to address climate change is almost shut.”

In the cautious language of diplomacy, no names were named, no governments called out. But around the world, the crack of batons and the tang of pepper spray have been common as some authorities are accused of using the cover of COVID-19 restrictions to commit abuses and limit free speech.

In Venezuela, advocates said quarantine was used to erode civil liberties. In Kenya, watchdogs said police enforcing curfew beat or shot dead civilians including a 13-year-old boy. Beyond the pandemic, anxieties are high in the United States about the voting process in the November election.

People must push back even in this socially distanced world, speakers said.

U.N. human rights chief Michelle Bachelet warned of a “crisis of governance” and a marginalization of voices that she said will only deepen grievances and harm all of society.

“We are witnessing an erosion of public trust in institutions and traditional politics,” said Eamon Gilmore, the European Union’s special representative for human rights.

Young people in particular are feeling increasingly insecure, he said. Economies are crumbling in the pandemic, erasing job opportunities, and millions of students are unable to return to school.

Speaking up for youth, the founder of Action for Justice and Human Rights in Liberia, Satta Sheriff, told the gathering that people like her should not be seen as simply waiting for an empty seat at the table.

Youth in the West African nation successfully pressed the government to declare rape a national emergency after days of peaceful protests, she said. Despite that win, access to decision-making spaces remains limited for youth, who face the “stereotype of constantly being labeled troublemakers,” she said.

Such frustration is especially potent in Africa, with the world’s youngest population and a median age of 19. The continent’s population is expected to double by 2050, and already a small corps of young opposition leaders in places like Uganda is challenging heads of state who have spent years, even decades, in power.

The COVID-19 pandemic is a crucial chance for governments to fight the urge to impose repressive measures and instead win the trust of citizens that's key to combating the spread of the virus, speakers said.

As scores of heads of state this week are making urgent calls to band together to fight the crises of COVID-19, Friday’s speakers on human rights stressed that governments must open the political space for everyone.

As the global toll closed in on 1 million deaths, the U.K.’s minister for human rights, Lord Ahmad of Wimbledon, reminded listeners: “It’s only over when it’s over for all of us.”