As part of the South African SDG Hub, which is based at the University of Pretoria, researchers from Freedom from Violence played an important role in assisting Statistics South Africa (Stats SA) in the preparation of South Africa’s first national report on the SDGs, which was presented in September 2019 at the UN General Assembly in New York. In particular, Dr Thomas Probert convened work on the reporting for SDG 16. This goal includes a wide range of indicators of interest to Freedom from Violence, including national statistics about homicide and other violent crime, the use of victimisation surveys to estimate the likelihood of reporting violence to the police, and efforts to combat illicit flows of weapons. It also draws attention to the broader themes of justice and governance that underpin violence-prevention work: ranging from efforts to combat corruption to the existence of independent human rights institutions.

The final report, as presented in New York, is available here.

This work was partly a recognition of Freedom from Violence’s expertise in the thematic areas covered by SDG 16, and partly contributed to further recognition, when in 2020 the University of Pretoria was ranked highly by Times Higher Educations Impact Rankings for its engagements around SDG 16.

Developing guidance on the use of "less lethal weapons"

Prof. Heyns—during his tenure as Special Rapporteur on summary executions—highlighted the importance of international attention being paid to the use of so-called “less lethal weapons” in several of his reports. In 2017-2018, along with the Geneva Academy for International Humanitarian Law and Human Rights, researchers at ICLA have played an important role in convening an Academic Working Group on less lethal weapons and related equipment in law enforcement. This group has involved a diverse range of policing experts, UN Special Rapporteurs, representatives of the Office of the High Commissioner for Human Rights, the UN Office on Drugs and Crime, the ICRC, academics and representatives of civil society organisations.

In 2019, the UN Human Rights Guidance on Less-Lethal Weapons in Law Enforcement was launched in Geneva, (at an event including three representatives from ICLA, Prof. Christof Heyns, Prof. Stuart Maslen and doctoral student Beryl Orao). The Guidance is available (in advance edited English here, translation into other official UN languages will follow).

Working with the Engineering Department, researchers are exploring the extent to which a technological solution can be found to address the challenges of police training around use of force by the police in Africa. Predicated upon the assumption that at least a proportion of unlawful police violence, worldwide, is a result not of malign intent but poor preparation, this project looks to develop simulated training exercises based upon the type of situations faced during day-to-day policing (which potentially differ from the situations included in training simulations imported from other jurisdictions.

Dr Thomas Probert was part of an impact-assessment study undertaken with respect to a project of the Danish Demining Group (DDG) in Somalia. The study was undertaken over a period of three months in 2019 in three of the ten locations in which the DDG is implementing its “Community-Police Dialogue & Cooperation” (CPDC) programme, namely Jowhar, Dollow and Baidoa. Following a desk review, a questionnaire was developed that DDG field researchers administered in addition to key informant interviews and focus group discussions.
Responses were used to compile anecdotal descriptions and assessments of respondents’ experiences of participating in CPDC. All but two of the individuals interviewed had participated regularly in CPDC work. At certain stages in the interviews, respondents were asked for their views on relations among the community, the CPDC committees and the police.

The study is available here.

In 2018/2019 Freedom from Violence was one of several partners in the development of a Manual to Facilitate the Operationalisation of the SADC Guidelines on Crime and Violence Prevention.

This Manual seeks to support practitioners at state and non-state level in the implementation of the Guidelines. The Guidelines adopt an all-of-society approach to crime and violence prevention through the framing of the document within a socio-ecological paradigm. It includes an overview of crime- and violence-prevention theory, as well as of promising practices for interventions; a framework for the facilitation of forums for community safety, the conducting of community safety audits and the development of community safety plans; and for the designing of comprehensive monitoring and evaluation framework as well as safety indicators. It is hoped that these will guide Member States in their reporting on the implementation of the Guidelines as per SADC’s resolution, which urges Members States to report on a regular basis.

The Manual is available here. More recently, Dr Thomas Probert contributed to a paper produced by the African Policing Civilian Oversight Forum and the International Centre for the Prevention of Crime, entitled Making Southern Africa Safe: Promoting Crime and Violence Prevention in the Southern African Region, which discusses the development of the Guidelines, the Implementation Manual and their contribution toward sustainable development. That paper is available here.

Following up on the work done to update the UN’s primary guidance on investigations into potentially unlawful death, researchers remain interested in the question of how work done to build investigative capacity can reduce levels of violence. This will involve a number of projects with partners around the world, beginning over the coming years.

In 2018 a project was launched in Kenya with a range of local and international partners, aimed at achieving a greater understanding of the limits to effective investigation of police-involved deaths in Kenya. The project will explore the extent to which the capacity of the Independent Police Oversight Authority (IPOA) can be enhanced, including with reference to the standards articulated in the Minnesota Protocol.

Collating national legislation concerning the use of force in law enforcement

The lack of up-to-date information about the legislative provisions of many countries with respect to the use of force makes it very difficult for international mechanisms (including for example the Human Rights Committee or the African Commission on Human and Peoples’ Rights) to review the extent to which the law provides a permissive climate for police violence. This project brings together both the laws themselves and expert commentary on the extent they conform with international standards protecting the right to life.

Working with universities and other researchers around the world, including the University of Oxford, the Geneva Academy of International Humanitarian Law and Human Rights and the University of Cambridge, we are building a one-stop reference resource for national legislation about the use of force, as well as international commentaries, and national case-law.

The resource now covers every country in the world. The full website can be found at www.policinglaw.info

In 2020 researchers at ICLA will be providing technical assistance to the African Commission in the preparation of a Study on the Use of Force by Law Enforcement Officials in Africa (following resolution ACHPR/Res.437 (EXT.OS/XXVII) 2020). This will in part build upon the resources already collated for the website.

Researchers at ICLA have for many years been working around soft-law standard-setting around topics connected to the State’s response to violence. In 2017 they were invited to assess the impact of one such set of standards—the African Commission’s Guidelines on the Policing of Assemblies. In order to do so, Dr Thomas Probert designed an attitudinal survey that could be used to assess police officer’s core opinions about assemblies (or “protests” or “demonstrations”) and some of the way that such opinions may inform officers’ actions.
This research project culminated in a large trial of the assessment in Malawi in 2018.  The results of the trial can be found here. 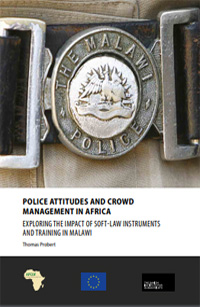 This pilot study has shown encouraging indications of the potential to use basic attitudinal questionnaires to inform training and/or other initiatives aimed at improving the effectiveness of public order policing.

by Dorcas Basimanyane and Dumisani Gandhi