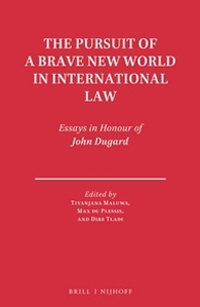 ICLA contribution:  Edited by Dire Tladi
Chapter on ‘Casting fresh light on the supreme right: The African Commission’s General Comment 3 on the right to life’ by Christof Heyns & Thomas Probert

The Pursuit of a Brave New World in International Law presents critical perspectives on various inter-related themes in the areas of human rights, international law, terrorism and international criminal justice. The discussions reflect the wide-ranging subjects that John Dugard has engaged with over the last five decades as an international law scholar, teacher and judge. The essays pay homage to Professor Dugard’s impressive body of work as both a theorist and practitioner of international law and international human rights law. While some of the discussions in the volume critically examine his views, as expressed in his academic writings, judicial opinions and official United Nations reports, others deal with subjects that have been inspired by or are related to Dugard’s work.