The Oxford Handbook of Gender and Conflict 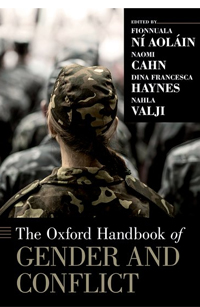 Traditionally, much of the work studying war and conflict has focused on men. Men commonly appear as soldiers, commanders, casualties, and civilians. Women, by contrast, are invisible as combatants, and, when seen, are typically pictured as victims. The field of war and conflict studies is changing: more recently, scholars of war and conflict have paid increasing notice to men as a gendered category and given sizeable attention to women's multiple roles in conflict and post-conflict settings.

The Oxford Handbook of Gender and Conflict focuses on the multidimensionality of gender in conflict, yet it also prioritizes the experience of women, given both the changing nature of war and the historical de-emphasis on women's experiences. Today's wars are not staged encounters involving formal armies, but societal wars that operate at all levels, from house to village to city. Women are necessarily involved at each level. Operating from this basic intellectual foundation, the editors have arranged the volume into seven core sections: the theoretical foundations of the role of gender in violent conflicts; the sources for studying contemporary conflict; the conflicts themselves; the post-conflict process; institutions and actors; the challenges presented by the evolving nature of war; and, finally, a substantial set of case studies from across the globe. Genuinely comprehensive, this Handbook will not only serve as an authoritative overview of this massive topic, it will set the research agenda for years to come.