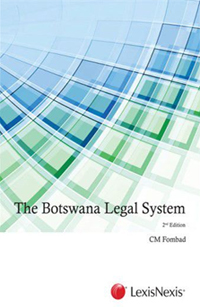 This book has grown out of the experiences of years of teaching introductory courses in law, to both law and non-law students here in Botswana and in other countries. Although it builds on EK Quansah's earlier mimeograph, Introduction to the Botswana legal system, this book is specifically written as a comprehensive textbook that targets law and non-law students as well as anyone concerned with the operation of the law.

Structurally, it is divided into five parts. Part I provides a general introduction to the nature and functions of the law as well as a brief outline of the major legal systems that operate in the world today. Part II contains a detailed account on the background to the present legal system in Botswana and then identifies the different sources of law that are applied in the courts in the country. Part III examines the various courts in the country as well as the different categories of legal personnel who are involved in the administration of justice in the country. Part IV deals with the enactment and interpretation of statutes. The final part discusses some of the crucial issues that have troubled students when tackling law examinations and also examines some of the key issues in writing a good legal essay and legal research paper.