Jus ad Bellum - The Law on Inter-State Use of Force 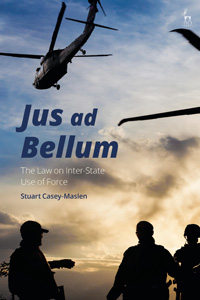 This work expounds, for those in practice and beyond, the rules of international law governing the inter-state use of force. Jus ad bellum determines when a state - or group of states - may lawfully use force against, or on the territory of, another state, and when such action violates international law. The bedrock of the law is found in the Charter of the United Nations, but the interpretation and application of many of the rules codified in the Charter, particularly by the International Court of Justice, are contested. Accordingly, the book clarifies the law as it stands today, explaining its many complexities and controversies, such as when non-state actors may be attacked in another state and when consent is validly given to foreign intervention. The interrelationships between jus ad bellum and the law of armed conflict/international humanitarian law, the law of neutrality, and international human rights law are also illuminated, along with important concepts such as the 'responsibility to protect' and humanitarian intervention.