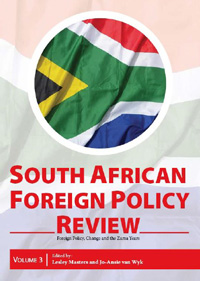 This third volume of the South African Foreign Policy Review looks back over the past 25 years and assesses questions of continuity and change in South African foreign policy. With the resignation of Jacob Zuma as President of South Africa (2018), this timely volume provides insight into the country’s foreign policy during his administration. While navigating foreign policy issues and actors that shape the country’s international relations, the contributors to this volume assess the role of the foreign minister, special advisers, think tanks and other domestic players who look to shape foreign policy.

Growing domestic interest in South Africa’s internation al conduct has raised public debate on questions of foreign policy, which authors grapple with in various chapters that address: the country’s approach to strategic partnerships, South Africa and the International Criminal Court ,international trade, development cooperation and nuclear diplomacy. As the country moves forward under new leadership, the book hopes to contribute to, and support further discussion on the future shape and direction of South African foreign policy.

Section I: Theory, Ideology and  orientation

Chapter 10: South Africa’s Economic Diplomacy under the Zuma Presidency: Where to for the new Administration?
Philani Mthembu

Chapter 11: To Give or Not to Give: The Politics of Ambivalence in South Africa’s Development Cooperation
Fritz Nganje

Chapter 14: A sunset and a new dawn: From Zuma to Ramaphosa
Jo-Ansie van Wyk and Lesley Masters